My (ex-)Governor has been arrested 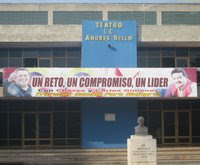 What you see there is on the right the present governor of Yaracuy, Gimenez, elected (?) in October 2004. His election was forced upon by Chavez campaigning hard for him. And he barely won, with Yaracuy having the lowest abstention in the country, facing what was reputed as the most efficient governor in Venezuela, Eduardo Lapi. Incidentally Lapi's party, incomprehensibly, obtained the majority at the state assembly while losing the main vote, something that even in normal democracies does rarely happen, something even rarer in Venezuela.

It is not idle to also point out that Gimenez was the mayor of La Independencia which he left to run for the Sate House. Yet, his designated heir came in third (in position 3) of the mayoral race there, so lousy was his administration. But Gimenez was picked by Chavez and yet he BARELY made it while other Chavez picks got nice victories elsewhere.

The above picture is the cultural center of San Felipe which under Gimenez has become the main gathering point for pro Chavez rallies, comfortably ensconced in an A.C. area while Lapi used to stay out in the streets to sweat it out with his followers. In other word, this public area has been politically privatized to serve the interests of only one political party. They are crass enough to advertise it pompously as you can see on this picture, the current sign meant to "celebrate" some recent "achievement".

Thus if I post this picture it is to give some context for the following. You can find plenty of such type of posters all across the state, including most public transportation careful repainted in the last year to the glory of the revolutionary leader. Always Gimenez associates his picture tightly with Chavez as he knows full well that without his blessing he is NOTHING.

As could have been predicted, Gimenez administration has been a major failure. Yaracuy crime rates have boomed (myself and most of my c0-workers have been the victims of crime in the past year). Unemployment has continued unrelenting. Investment is down the drain as Yaracuy went from the state with less agrarian invasion to become perhaps the one with the most interventions and agrarian crimes in the whole country! Even drawing the attention of the Spanish government whose nationals living in Yaracuy have been threatened. Streets and roads have become a gigantic Swiss cheese. The major highway which was known through Venezuela for its security (the most road cops and rescue services) is now a place where you do not want to drive past 6 PM. It is so bad that my chavista workers have started to complain to me, have even told me that Gimenez is a thief, a druggy and what not. Not that these possible gossips affect my opinion of him: as the mayor of Independencia he had amply demonstrated to me his incompetence. But it is telling, very telling that it took only one year to transform Gimenez from the vanquisher of Lapi to a sure candidate to a Recall Election next December, a recall called up by the MVR himself.

Because this is where it gets interesting: Gimenez is a PODEMOS governor, a junior partner in chavismo and the local MVR has had its fill of him and his gang. The writing is on the wall. Two weeks ago his sponsored candidate in Nirgua bit the dust in front of a dissident chavista….

So what does Gimenez do to fight his sagging fortunes? He jails the one that represents all that was good in Yaracuy, the governor whose efficiency allowed him to do more with much less money than what Gimenez is doing with now the petrodollar faucet opening in Yaracuy. People are not stupid, they can add up.

In fact it is so bad that one of my co-workers who lives in a middle class neighborhood told me that when she moved in there last year she got a visit from the local neighborhood committee. They asked all sorts of questions, as if it were some informal census. Since then they know if she participates in the local "neighborhood" (read: political) activities. Yet, as she does not do so, they still try to buy her approval by bringing to her home a free Mother’s day a bag of dry food, Mercal like. That is, vote buying is going full swing, even with people that can afford their own food.

This explains the actions against Lapi today. As the LVA scandal shows no remission, as other corruption scandals keep coming, or remain in the back burner (think the Barinas Potemkine sugar mills) it is important to show some active fight against corruption. Thus Gimenez decided to ingratiate himself to El Supremo by doing two birds in one. But it might backfire.

The excuse was some highway project duly approved by the chavista government for Yaritagua. Construction had started. When Gimenez reached office the first thing he did was to close the works. It was supposed to be an underground bypass, technically approved by Caracas. Without seeking the Caracas permits, Gimenez had it changed for a tumulus bypass!!! That is, he had the holes already dug filled up and started cutting Yaritagua in two with a huge wall, bypass on top, in spite of heavy protests from the locals. Of course, the new contractors were pro Gimenez, or at least not the ones selected by the Lapi administration.

Certainly, scavenging through all of these contracts will yield something, except that now it is chavista judges doing it, and even if the Gimenez project has been stopped by Caracas (!!!) his role is NOT INVESTIGATED. But Lapi has been investigated since early last year. There have already been search warrants emitted and his house searched for “documents” I think already three times. Yet Lapi has remained calmly and confidently in Yaracuy to face any prosecution. This did not stop prosecution to justify his incarceration because he "could flee the country". This must have infuriated the Gimenez people. More action was needed. So, this morning, at 4 AM about 2 or 3 dozen DISIP commandoes fell upon Lapi soundly asleep with his family and a single guardian, search warrant in hand of course. Images of Lapi today were all smiles. If there was any compromising paper in Lapi house, it had been dispatched long ago before this morning…

Now, I am not defending Lapi, I never cared much for him as a person as he is as authoritarian as Chavez is, but at least efficient. I do not know whether he stole himself, but I know of some of his collaborators that did make good under his tenure (and of others that just went back to their old lives without any extravaganza). HOWEVER I am sure of one thing, his administration certainly did steal or waste less than the current one as Lapi did more, much more with less money.

Make no mistake, this is a political circus to prop up a failing governor. It will not work in Yaracuy. It is too late for Gimenez, and this can only hurt him even more. But it affects us greatly because we are a small state and Gimenez vengeful hand is perceived as controlling the judicial system (I know of several prosecutors fired for refusing to perform certain "orders"). No one here, and certainly not this blogger, feels safe anymore from the wrath of an local potentate whose "administration" is collapsing in infighting and who can use anyone as a convenient scapegoat.
Posted by Daniel at 5:22 AM