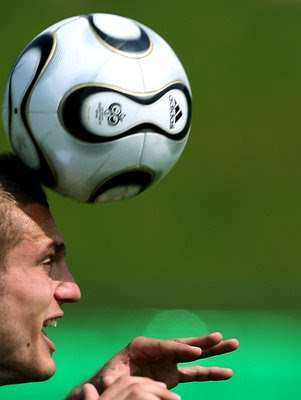 This picture of a Serbia-Montenegro player shows pretty much what will take place in people's mind for the next month (though Serbia-Montenegro is recently deceased, it will not stop both countries from playing this last cup together).

This blogger will go on a an erratic writing mode. Not infrequent but erratic. Though he is contemplating the purchase of a WiFi so he can watch football matches while typing witty and deeply relevant posts on Venezuela (if he does not trashes his lap top on the floor when he jumps whenever France scores).

My predictions (I am in a daring mood today). I am afraid it will be Brazil again. Afraid because contrary to popular taste I have never cared much about Brazil in football (though past posts here attest to my love of the country). But there is, I think, a good chance for Argentina (which contrary to popular tastes I like). Other possible contenders include France (my favorite of course) and England (who I think particularly strong now that Beckham is not its super star anymore). For Germany it might not be enough to have the home advantage. And Portugal is the dream outsider.

My dream final game? France against either Portugal or the USA. I can dream, no?

PS: note to the US readers. Two things. 1) this morning google news had the world soccer cup in third!!!!!!! I mean how provincial and self centered can you guys get? Heck, are you aware you have a team in the World cup? and 2) I usually try to use the term "soccer" for Football as my counters reflect more than half of the readers from the US. But through this month the word "soccer" is banned. Deal with it :)
Posted by Daniel at 4:49 PM