The Peruvian situation is evolving in a strange way. In an earlier quarrel Chavez stated that he would break relationships with Peru if Garcia were to win. That was only the last drop in the bucket of Venezuelan intervention in the Peru affairs. Toledo adequately replied and the whole thing ended up in recalling the mutual ambassadors.

One would have thought that for Chavez enough is enough. But no. Last week again Chavez went ahead promising from Bolivia that he would simply not accept a Garcia victory, that Venezuela would not do business with a country that could vote for such a crook (conveniently forgetting that other countries could have said the same thing against Venezuelans if they were going to vote for a coupster!).

Of course, this was rather surprising considering the damage it did to Humala in his previous outburst. This time Humala had to go out and say that Chavez was speaking nonsense and trying to put as much distance between Chavez and himself. Hypocrisy this late in the game? I am not so sure. I have been suspecting for a couple of days that what is going on is that Humala might have felt out of favor with Chavez. We already got the declarations of his wife saying that Chavez should stay out of Peru. Humala in this last campaign stretch has run more a Peruvian campaign than and “international” one even though the “international” issue, Chavez, has become a main problem. Simply put, maybe Humala does not want to become a pawn of Chavez and Castro the way Morales in Bolivia has, amazingly fast, become!

It is not such a great leap to imagine that Chavez has decided that if he cannot control Humala, he might as well get rid of him, hoping that a Garcia administration will blunder enough to allow him to find a better, more malleable substitute to Humala. After all, breaking relationships with Peru, starting an ongoing war of words against the FTA countries, the Andean Community, might be a better long term strategy now that Uribe is more powerful than ever. The “masses” suddenly seem less favorable to Chavez, a little confrontation might be good for the long term goals, to rally them when better days come (in particular if signed FTA do not turn out as the signatories expected).

There is a little cartoon that adds some veracity to my hypothesis (hat tip to Miguel). It seems that in Peru many people think that Bolivia is now administered by a Chavez proconsul…. (Published in El Expreso from Peru, my translation) 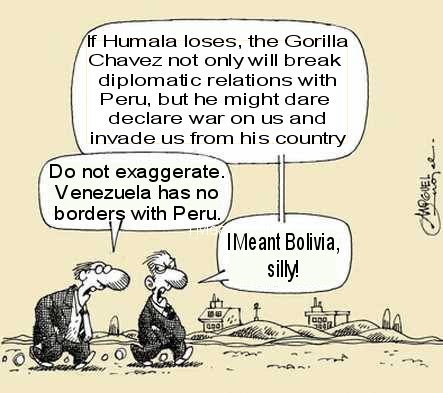 PS: I did not put any links as I have internet problems today. But the declarations referred to in this post can be easily found through El Universal, Union Radio or Google news. I will try later to add the necessary links.
Posted by Daniel at 6:24 PM