Anti semitism on the rise in Venezuela

Tonight I would like just to describe a particularly unsettling ad published in El Nacional (and opposition paper, read by the intellectual elite of Venezuela if anything because it carries the only literature section worth reading in Venezuela). The advertisement below is paid for by the governor’s office of the State of Anzoategui. The governor of said state is Tarek William Saab of Libyan origin. He used to be a defender of Human Rights in Venezuela, cutting a rather strange figure dressed in black with his pale face, he also claims to be a poet. You can see a poem and a picture here.

When Chavez came to office he was of the party and ended up in the National Assembly where among other things he occupied the chair of the foreign relations committee. His tenure was very controversial. He was everywhere Chavez needed him, including threatening anti Chavez protesters in an Oxford visit. His pro Arabic views and misplaced militancy earned him the dubious privilege to be one of the first members of the regime to have a US visa denied. He was lucky enough to be rough handled in April 2002 which he showed as a badge of martyrdom, even though in his case opposition politicians came rapidly to his rescue, dimming somewhat the shine he could have extracted from this event. At any rate he became quickly a main apologist for the regime, in a now professional role for the denial of chavismo Human Rights violations in Venezuela (an example of his work on this organized denial here where the only good Human Rights Organizations are those that see nothing, hear nothing say nothing)

Eventually Chavez sent him to Anzoategui to become the new governor in 2004. He was born in El Tigre, which justified it even though he was more of a Caraqueño than anything else. There his arrogant ways earned him quickly a lot of enemies, mostly within chavismo. Then again his now totally militant zeal so at odd with his past as a human rights activist even brought him into conflict with the large UDO campus authorities where he wanted to change the white letter signs of the name for red letters.

This progressive hysteria goes a long way to explain this sign. Before I explain the text, it is important to stress that this sign is posted by a governor, at tax payer expense money to advertise his own political cause. A Venezuelan Governor has no jurisdiction on foreign policy. This by itself is already a misuse of public funds that should be not only investigated but enough to impeach him. Note also that this add comes at a time when Chavez is touring some unsavory countries and exploiting as much as possible the Middle East situation building an anti Israel and anti US coalition. I do not know whether Chavez will succeed in his effort, but the least we can say is that the government is having more and more trouble to hide its patent anti Semitism.

And now the ad (click the image to enlarge and read the text). Note first that the language is borderline: one cannot really prove it is a clear anti Semitic tract. But experience tells us that the implications of this advertisement are clearly anti Semitic (even though people tend to forget that historically Semites include the Arabs).

You will observe the construct of the advertisement: ALL major Israel faults in the Lebanon are duly listed with dates and numbers. Yet you will not see anything about the Katiushkas shelling Northern Israel. You will not see about the suicide bombers to Israel.

I have underlined or circled the different allusions or direct attacks that abound in this tract. It sickens me to translate it but if anyone sees a purpose in the translation I will do it. Observe how the words holocaust and genocide are carelessly used, voided of any organic comment. Unforgivable! 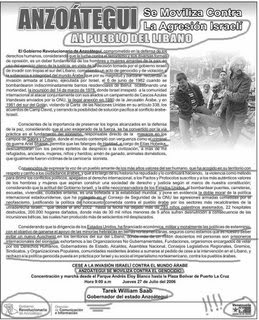 My conclusion? This is a first act in the road to “educate” the Venezuelan people, who in general ignores everything of the Middle East, in ONLY the Arab/Palestinian point of view. The state is promoting and paying for this education in lies and hate. Note the irony of the logo on the bottom right, "Venezuela belongs to all". Never my take on that logo (on the right of this blog) has been so meaningful!

The Jewish community of Venezuela had better take notice.
Posted by Daniel at 6:06 AM