The Venezuela, or rather Chavez, debacle at the UN gives us great occasions to observe some variety of chavista fauna go into fits. Last I reported on how the vice president of the republic, J.V. Rangel accused the opposition of being “cipayos” (sepoys) not realizing himself that he is no better than a cipayo of Castro, as much as his boss is. Well, one could argue that his boss is even worse than a sepoy in his adoration of Castro since he does not even seem to require some of payments that a sepoy usually asks for. But I digress.

As I am on the road I am catching the news late but there were two items that I did catch and are worth sharing.

La Hojilla as an angst exercise

La Hojilla is a particularly disgusting state TV show, VTV, where some guy using a bust of Che on ther front of his desk spends up to two hours trying to discredit any news reported by private media (1). All of this at tax payer 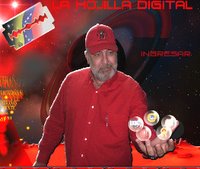 expense. In vulgarity, truth twisting, anxiety and vileness, it is difficult to find something that could match the infamy of some of the Hojillla occurrences.

I turned on last night late because, well, after the dramatic week at the UN I was morbidly curious. I was not disappointed. The speaker was trying to make a point that at the UN it was a Venezuelan position, not a Chavez position. Something of course that even some semi enlightened chavista would disagree with. But pretty much it was in the line of the VP “cipayo” comment. What was particularly interesting was his particular use of obnoxious and meaningless props, including historical examples of long ago as this would justify today’s abuses at the UN. I will spare you the details: they were not even as meaningful as the shifting eye of the guy who was at once trying to hide his anger against the opposition and trying to hide that, well, he was lying and he knew it. That is, just like a small kid that has been caught and is trying to make up some story. It would be amusing except that it was done at tax payer expense. And all of this is not accounted by CNE as pro Chaevz pro electoral proganda, by the way.

Long ago I reported that one of the token chavista columnist of El Nacional, Mari Pili Hernandez, was a lousy columnist who spent her time trying to sugar coat as unpalatable a Chavez utterance as she could deal with (here and here). Her “new agesy” approach, while she is only one to two pages away of the substantial Milagros Soccoro, is particularly pathetic when she tries to give advice to the opposition.

Thursday she just went over the edge and the last paragraph is worth translating (the article is a worthless piece of hagiography that does not deserve more than a cursory glance). I put it in Spanish below and then my own translation, to make sure that the reader gets the full effect (sorry, El Nacional is only by subscription)

Proud of being a Venezuelan
In front of this situation [the miserable 70-80 to 100-110 UNSC vote result], what a pride of being Venezuelan! What a joy of being living such an historical moment, where the fatherland belongs to Venezuelans and not to whomever is in charge in the US! What pride in feeling like a deserving heir of Bolivar! What a pride in knowing that our country is free, independent and sovereign [“soberano” has become a meaning loaded word in Venezuela that defies any real translation]! What pride to have a president who does not kneel and who has as his only boss the people of Venezuela!

The easy explanation is of course that Mari Pili does not live in the same country as I do. But that would be too easy and would hide the real importance of these words: the bimbo (sorry, not other word comes to mind to this ardent feminist as Mari Pili seems to be the negation of feminism in spite of her revolutionnary inclinations) that wrote that indecent sycophancy is (was?) the vice foreign minister in charge of North America relations. And with those words she comes dangerously close to support war for Venezuela: the tile of the article is “Rodilla en tierra”, which means knee on ground, ready to shoot. So much for the love campaign of Chavez.

Meanwhile for those who worry about what is Chavez foreign policy all about, well, now with such an assistant you know better.

--- --- --- --- ---
1) There is a link to a rather lousy web page but at the beginning you can download the pic of the host who floats in his left hand the logos of the private media shown above. Apparently he thinks that he really hurts them. Quite telling even before you read a single word of the page.
Posted by Daniel at 9:43 PM