Among the many signs that point out to the governmental debacle in the UNSC seat there is this particular phrase used by the Vice President, Jose Vicente Rangel. He said that the opposition was rejoicing in the defeat of Venezuela, that it was “una oposición cipaya”, a sepoy opposition.

I thought that this was worth examining as it reflects so accurately the mentality of the people still behind Chavez.

But first a little bit of background. Chavez and Rangel have started using on occasion the term “cipayo” to refer to the opposition as servants of the empire, namely the US. The Spanish word comes through English, a fact already amusing enough in this context, and refers to the Indian soldiers, sepoy, who served in one of the foreign armies that made India a European colony, mostly these Indians who served in the British army. The obvious implication is that any Venezuelan opposition to Chavez is equal to betrayal of the fatherland. We are even worse than mercenaries, since those at least serve in distant lands: we are mercenaries at home. But let’s get beyond such simplistic imagery (which is probably not historically understood by the chavista on foot, by the way) and look at what lays behind.

The UNSC as a sporting event

The first thing that we must observe is the rest of Rangel words that suggest that the UN fight for an UNSC seat is hardly much more than some sporting event, and thus we should all root for Venezuela team. Politics becomes thus a sporting event, be it in Venezuela or the UN.

Thus we can understand much better some of the actions of Chavez. All his foreign policy is now 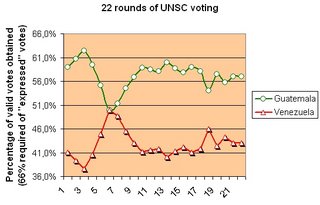 geared towards getting a maximum effect. It does not matter if people die along the way, if some weirdo with bad hair gets a nuke, what matters is that Chavez is the leader of part of the world. How else could you explain that the dismal figure on the right is considered by chavismo as a great success? "yes, we will not get the UNSC seat but we stopped the US trying to impose Guatemala" some are saying. The US imposing Guatemala? Countries like Spain are imposed on by the US to vote for Guatemala? (as is most of Europe known usually to vote against the US in, say, Iraqi matters).

In chavismo mindset the countries voting for Venezuela are the only free countries, free of US influence that is, the new litmus test of freedom. Freedom is not anymore traditional values such as separation of powers, fair elections, democratic respect for minorities, etc… We thus finally realize that Spain never got free from Franco and kept its US enslavement.

We are asked to conclude that Venezuela is now the leader of about 70 countries of the world. We do not know exactly which ones those might be (though we can easily guess), but we know that Chavez is heir hero. Apparently the 110 that keep stubbornly voting for Guatemala are just pawns waiting for Chavez to free them. Poor dears, they do not know better. And of course 70 free countries, even if the burqa is de rigueur in some, weigh much more than 110 countries voting against Chavez.

As we have all sorts of people pretending to cheer up the government failures, the opposition, embarrassed by “el papelón” is accused of not supporting the team, of betraying the country. And we are threatened with worse if we celebrate that Chavez is exposed as a liar when he announced that he was holding at least 100 UN votes for last Sunday. Should we not worry that our president is such a big liar? And that he spent millions for his lies? But in chavista world Chavez has become the embodiment of the state, a new "L’état c’est moi", and going against him is going against Venezuela.

But perhaps Chavez is unto something: part of his appeal to Venezuelans has a certain je ne sais quoi of tribal. We are all in the same boat and we should all support the leader and if we do not support him, no matter what blunder he is making, then we might be jeopardizing the future of the tribe. Tribes suspend the usage of reason, be they in the wild where quick reflexes matter most, or in urban jungles where quick reflexes matter even more.

What Rangel reveals is his total abandon of democratic understanding, his new found inability to comprehend that dialogue, even if vigorous, is the essence of democracy and that when whomever in the country that disagrees with you can be treated of “cipayo” then you have license to eliminate them form the public view. This is exactly what chavismo is planning for next year if it stays in office. It is announcing the color more and more clearly as the campaign progresses. Or does anyone wonders about what “one party state”, “unlimited reelection”, “sixth popular power” mean?

Oh, and by the way, there was a famous Indian mutiny that could have toppled the British rule in India. One of the names of that mutiny was the Sepoy Mutiny of 1857. Rangel could read a little bit further in history before he chooses his terms.
Posted by Daniel at 6:29 AM