Rosales asks Fidel Castro to give Chavez permission to debate

Rosales today issued a direct challenge against Chavez, for a debate. Amusingly, but also shrewdly, he asked Fidel Castro to give Chavez permission to debate Rosales. Pantomime? Joke? No, it is really serious and it does show that Rosales keeps monitoring well the pulse of the campaign. 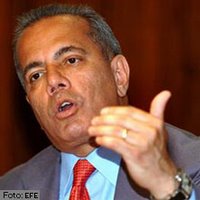 authoritarianism, in a lighter mode than Cuba perhaps, but an autocracy nevertheless where some if not many civil liberties will be restrained if not suppressed. It is all in the Chavez program for those who care enough to read about it (one party state, limits on private property, indefinite reelection, end of private education, permanent conflict with countries espousing non socialist systems, etc, etc…). Rosales is right to bring Castro finally in the campaign. People must confronted to their choices.

Rosales has been keeping the heat on Chavez. For the last month he has slowly built a basis, a reason to vote for him, a differentiation with Chavez while not being afraid of retaining the populist option without which you cannot be elected in Venezuela. Now, he must build on reasons not to vote for Chavez and this debate challenge is the first step. (1)

It is important to note for the foreign observer of Venezuelan politics that Chavez has never debated with anyone, be it in Venezuela or be it in an international forum. Even worse, Chavez has avoided as much as possible press conferences where journalists can ask embarrassing questions or be allowed to follow up questions if the reply is not satisfactory. And in the very rare instances where a journalist manages to corner Chavez this one does not reply the question and instead tries to discredit the said journalist by asking the unfortunate soul for which media it works and then go on his usual tirade on all the media of the world are sold out to Bush, the US, the IMF, or whomever it suits Chavez.

Thus a debate is a weak point in Chavez because in Venezuela WE ALL KNOW that Chavez refuses to debate, and now even refuses to listen to anyone but Fidel. The reasons why he does so are irrelevant; the only one I would bother advance is a mechanical one: Chavez is unable to give a clear and short answer and that is a minus in a debate. On the other hand Rosales might not be a good speaker but he is good at replying in short a precise answers (when politically convenient, that is; he is a political after all). Already during recent days chavismo, sensing that the gauntlet was about to be thrown, has started to say the Chavez was too good, too important to debate Rosales. Better for the opposition: further arrogance from chavismo and Chavez can only rest him points. If you doubt it look at Lula or AMLO in Mexico who were too good to debate their opposition. The first one is today obliged to run in a second round and the first one started his descent from sublime heights to a close defeat.

We shall see what happens, but as far as I can tell, it is a good move for Rosales.

You can read the details of the challenge in English as Alek reported on them live.

1)More than a foot note, an extension of the above post. I was yesterday musing about polling and little did I know that today three pollsters would emit results, very contradictory at that. I think that the reports a worth a foot note as they illustrate how Rosales strategy is now showing its first results: he might not be ahead of Chavez still, but now he is definitely in a challenger position with still over a month of campaign to go.

In no particular order of importance:

CECA optimistically declares that Rosales and Chavez are now statistically tied. Apparently this result is obtained when the polled folks get to vote on a piece of paper in a box carried by the interviewer. Maybe, but I am sure other pollsters use such artifacts to get "truer" replies. Let's just say that the value of this result is that Rosales is going up.

Datanalisis is much more conservative. It has routinely been giving higher numbers of Chavez than other pollsters considered pro opposition. IT still gives good numbers for Chavez but now says that the gap has closed significantly, and that it is related to the radicalization of the Chavez speech as many people do not agree within chavismo on the new proposals.

The last one is a commentary by Ocar Shemel of Hinterlaces. He is more worried about what he calls, provocatively, a loser president no matter who is elected. That is, if Rosales fails to make indents in the populist basis of Chavez, his victory would be hollow. But if Chavez wins, it would be equally hollow because he would be elected with already a see of discontent and protest around the country, and anything less than a smashing victory would handicap greatly a president already showing signs of wear and tear after 8 years in office. At any rate, Shemel says that the opportunities are in the Rosales camp and that Chavez is fighting to retain as much of his electorate as he can.

No matter what these sort of contradictory results say, Rosales is on the rise and Chavez is on the defensive. As for myself, I will wait for the next Keller poll, the one to follow.
Posted by Daniel at 7:47 PM