That feeling in the air: Chavez in trouble?

I do not want to sound too positive but for the first time I am allowing myself to think that perhaps Rosales might win. Why? Well, the extraordinary release of the AP-IPSOS poll giving a ridiculous advantage to Chavez in the midst of a context that makes this poll totally incongruous.

Readers of this blog know that I pay little attention to political polls in Venezuela. At best they serve to indicate a trend, and in today's troubled times of vote buying and Tascon threats, well, they are mostly useless even for trends. Anyway, I certainly do not obsess over polls, in particular when they go against all that I can observe. And that AP poll, o boy, does it contradicts everything that has been going on lately.

To give the reader some perspective, let's start by asking how familiar Ipsos is with Venezuela polling (I could not access the methodology page so I cannot tell much there). However what I can report is the consistent underwhelming and undercounting reports from the AP who seems everyday more and more to take its news directly from ABN.

So let's not be picky, even as pro Chavez pollster are trying to "improve" Rosales numbers, blithely comes AP-Ipsos to give us a difference of 32 points. 32 points! I mean, how clueless can people be? But it gets much better when you read the AP article. One paragraph deserves full quote:

The poll showed 57 percent of respondents were at least somewhat concerned that people could face reprisals for how they vote - 79 percent of Rosales supporters and 46 percent of Chavez supporters. Such a fear factor is a potential source of survey error, meaning for instance that some respondents might feel afraid to tell an interviewer they support Rosales.

This is not only ill written, but it is an admission (subconscious speaking?) that the survey sucks. Enough said!

Back to the streets and TV screens

This colorful Spanish expression means barking inside the lair. That is, your dog is bold enough, self assured enough, that it enters in the lair of the beast and bark to dare it to come out and fight. Well, this is exactly what Rosales did yesterday in Chavez home state of Barinas. And Rosales filled up the streets in a more than surprising way. This while Chavez went to reinaugurate the corruption laden Central Azucarero Ezequiel Zamora of Barinas, the very same day. The investigation for corruption seems to have found the dusty drawer where all corruption cases of chavismo land. I assume that the stunt was Chavez way to pretend to distract from corruption. Maybe, but the attendance was a bust and I could not find any good picture of Chavez event while Globovision and the Rosales site showed spectacular night views of Barinas crowds cheering Rosales.

That is still not enough. Chavez did manage to have a decent rally in Tachira, in fact the only one you can find on ABN that shows panoramic views of Chavez campaign acts. All the other are close-up views so you do not know whether 1,000 or 1,000,000 attended. We guess it was 1,000. But Rosales repeated even bigger than in a previous visit to Valera, showing that perhaps the Andes will all go to Rosales in a week. Even tiny Carora went blue a day earlier.

VTV and VIVE on the photoshop chase

This morning I was watching in utter fascination VTV and VIVE efforts to minimize the Rosales recent surge (CECA, while we are speaking of polls just came out with a 6 points lead FOR Rosales, but I will not even bother comment on that one). Inspiration has completely left them. Now we have the minister of universities, ineffably exquisite Samuel Moncada come with a pic of Rosales backing Carmona, supposedly, on April 13. So, what else is new Samuel? Kind of late for this. How come you did not get that picture earlier? Don't you think that by now we know full well who Rosales and Chavez are?

On VIVE there was some guy very seriously saying that the opposition was preparing a fraud on tomorrow's Caracas event, by using old footage of the 2002 marches "when they still had some people with them". One does not know whether to cry or laugh at such stupidity.

Of course, no discussion whatsoever on Chavez proposals, only negative campaigning. Exactly what a losing campaign does.

Since Rosales stole the thunder of chavismo by saying that the Bolivar avenue was too small and they would go on the main Caracas highway tomorrow to close the Caracas campaign, poor chavistas were at a lost on how to counter this. If Chavez were indeed 32% ahead it would be so easy for him to get the Caracas highway and more than match the allegedly meager Rosales crowds. But no.

Finally someone had an idea: a street festival. That way if people do not come to watch Chavez, at least they will come for the street fair activities that include a dozen or so music stands. They will be spread around Caracas downtown, include some shopping areas, and take over the Bolivar avenue plus the Lecuna and other stuff. And, imagine that, Chavez might or might not appear, and nobody knows at which street corner.

Translation: if the turn out is decent, Chavez will hold an impromptu rally on the Bolivar, or the Lecuna if fuller, and justify his lower attendance to the surprise effect. And it will be hard to compare exactly a scattered event on several main drags to a compact one on Saturday. We'll see if chavismo can get away with it, but I doubt it very much.

Oh yeah!!! Chavismo shows all the signs of a losing campaign. That does not mean at all they will lose on December 3, but in the last two days I have seen enough to start beleiving that an upset is actually possible. And thus I went ahead and did a new update BEFORE tomorrow rally. I am just putting the color graph. I will post again the excel data later next week as I give my final prediction. But right now I am giving Chavez still with 500 000 advance (52 to 47). Reminder: my excel sheet is biased in favor of Chavez thus I could indulge and announce a technical tie in the Venezuela News and Views poll :) 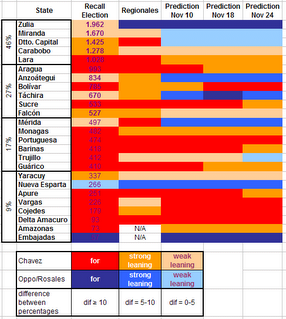 I have downgraded Chavez in Barinas and Sucre (due to Barinas showing for Rosales and a little bird from Sucre). Trujillo is now weak leaning for Rosales but the good rally of Chavez in San Cristobal forces me to lower the expectations of Rosales in Tachira although I am sure he will carry that state. Miranda and Caracas? We will have to wait for this week end events. They will either stay as is, or go deeper blue. There is no sense of Chavez victory in Caracas where I am these days, the best he can hope is to avoid further degradation there.