Next May, the oldest broadcasting TV in Venezuela, RCTV, is scheduled to close. Chavez has decided so, and although a legal battle is under way, it is difficult to imagine that the Venezuelan judicial system will go against its master on such an important issue.

Now that a few weeks have passed since the different announcements it is time to visit this issue in a more constructive approach. That is, let’s try to understand what this is all about. The gist of the matter is simply Chavez trying to curtail freedom of expression. We have seen this happening under all sorts of autocrats. The latest Latin American episode has been barely a decade ago under Peru’s Fujimori. Before? Too many to recall. We could even call this the press control paradigm. The only difference this time is that Chavez is doing it in the era of Internet and with a lot of money to back him up.

More than a generalized discussion over this issue let’s look at some of the items advanced to defend something which cannot be defended. Many arguments have been proposed by chavismo and his defenders. They have all, without a fault, been proven hogwash, mere lame excuses to justify the real desire of the regime: no broadcast criticism of the regime.

Quality programming and the implied ratings

One of the regular canards aired is that RCTV is lousy programming. If this were a real reason to close a TV station, then VTV, the state outlet, should have been closed long ago. Anyone that has watched the vituperative, grossly vulgar and insulting “La Hojilla” should wonder how such garbage is aired. That it is aired would not be so bad if those who are routinely insulted by La Hojilla could come and reply. But there is no reply right in VTV which is 24/24 Chavez propaganda where any opposition idea or personality is ridiculed as much as possible.

Compared to that the mix of tasteless games and questionable soap operas broadcasted by RCTV this one does not look so bad. At the very least they are entertaining for the masses whereas VTV is more of a manhunt reality show without entertainment value except for the hardcore chavista who needs to be up to date on the latest political one liner to be thrown against the opposition. There is not a single VTV show worth watching, not even the Villegas one in the morning. The ratings do not lie: RCTV hovers between 30 and 35% whereas VTV never seems to reach even a meager 10% audience share, stuck, we are told at a paltry 3-6%. You know this is true because private advertisers that used to be rare in VTV 2-3 years ago have completely disappeared.

The low ratings are really the most irksome aspect of the whole business for the government. In spite of lots of money thrown at VTV to spruce up its image and try to bring some levity to it, the only show that manages to have a rating worth talking off is Alo Presidente, the Sunday Chavez talk show (now prime time Thursdays). The ratings of this show are not made publicly available. Chavismo claims 80%. Experts give considerably less numbers. All indicates that only in time of crisis does Chavez threatens the ratings of the other TV stations.

Now. Let’s look at that 30% rating of RCTV and let’s look at the 62% who allegedly voted for Chavez last December. Does anyone believe that no chavista ever watches RCTV? The 37% who voted against Chavez are all of them watching RCTV and Globovision? Indeed, the hoi poloi, chavista and anti chavista alike do watch RCTV. Could there be anything more galling to Chavez after years spent attacking RCTV?

RCTV is a “golpista” network

The real reason it seems why Chavez hates so much RCTV is because one of its owner, renowned interviewer Marcel Granier, refers to Chavez as “teniente coronel” (lieutenant 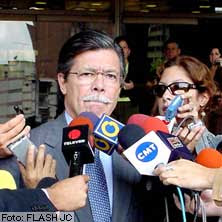 colonel). There is no denying that the tone used by some RCTV people (and also many non RCTV folks) is pejorative against Chavez who should always be referred to as “Presidente”. But since Chavez himself has no qualms whatsoever in destroying the presidential dignity by calling names his opponents, he has only himself to blame. Besides, “teniente coronel” is perfectly right and accurate as it is the grade Chavez held when his military career ended after the 1992 coup. So, it is fun to hear Chavez accuse RCTV of being a coup monger channel (“golpista”) when he is himself the director of the February 1992 coup, and the inspiration of the November 1992 attempt.

So, which are the arguments of Chavez to consider RCTV as more of a coupster than he his? It all comes from April 13 2002. This day RCTV had a black out on the news as the Carmona ill fated stupid and silly adventure was floundering fast. In the chavista legend throngs of people descended to the streets to have Chavez back. In all truth, the video evidence presented so far speaks of a few thousand at most, and in very circumscribed areas of Caracas. Nevertheless RCTV (and the other networks who also shut up on the day but who today are not a direct target as RCTV is) did have a black out of news on that Saturday until it became news itself as chavista groups, led by Bernal, started threatening RCTV and other network offices.

But in this argumentation falls easily, after February 1989 networks have been weary of showing street rioting else they be accused of promoting such rioting. But this is not really an argument one way or another. See, if one must be fair one should compare the black out of April 13 to the Chavez cadena of April 11 when he was trying to cover up the Avila Plan he had called for and while the April 11 march was been shot at. When the march was approaching Miraflores Chavez decided to put up a cadena, on of this universal simultaneous enforced broadcasts of all TV and radio. Meanwhile the Avila Plan call, a repressive plan for the Armed Forces to quell any rebellion, was met by refusal from the officers in charge of applying it. While "someone" was shooting the marchers, nobody could figure out anything because Chavez was talking on TV. Eventually private networks, RCTV ahead perhaps, decided to split the screen. On one side you had Chavez and his soundtrack live, on the other side, silent but telling of the inferno street scenes taking places in Miraflores. That precipitated the brief fall of Chavez.

Certainly if RCTV does deserve a trial for the April 13 blackout, Chavez deserves one even more for his own brand of black out on April 11.

I feel like mentioning this possibility since I just mentioned that Chavez deserves a trial from April 11. One accusation that is thrown at RCTV is that it is violating the new legal code on broadcasting. Unfortunately there is no proceeding against RCTV worth discussing and even less of a sanction in any tribunal. Thus, if RCTV were such a violator we would not be having such a post today as RCTV would have been proven guilty, fined and shut down after recidivating. Since this has not happened, then RCTV is not being closed for being a lousy law breaking network (or at least not any lousier than the other ones, including particularly VTV). It is shut down for another reason, but not for legal and verifiable ones.

To conclude this already long enough post we can look at the most amusing charges of all: RCTV is not fair in its reporting on governmental actions. This is highly amusing to me because 1) RCTV spends not even 10% of its broadcasting time in news or announcements and in those one quite often we can see government officials visit. How often has Lina Ron or Iris Valera been on “La Entrevista” early morning talk show? Just to mention some repeat visitors. The news at night are much more focused, it is true, on the suffering of the people, morbidly so even. But after all people do tend to go to RCTV to air their complains as the doors of VTV are notoriously tightly closed if you want to complain against any governmental abuse or inefficiency.

I do not know if an accurate measurement exists on who goes where but form my own experience, I am ready to stick my hand on fire that RCTV is much more open to chavista visitors than VTV to opposition ones on news per minute basis. That is, if we consider that VTV spends about half its time in pro Chavez talk shows whereas RCTV has only one in the morning, RCTV might come out way more open to other voices than VTV.

Let’s be frank: there is nothing as unfair in Venezuelan TV as VTV. I dare anyone to prove me wrong. Accusing RCTV of unfairness is probably true also, but then again the government should start by cleaning up its own house.

RCTV might or might not close. It has ceased being the point. The point here is that Chavez for personal reason, and for the need to control the media, has decided to close RCTV. That is all.

If RCTV is being closed it is not because it is a bad network or a criminal one. It is because chavismo wants to take the choice away from you. TV is very powerful in that anything that does not catch the attention of the viewer is immediately sanctioned when the viewer switches channel. People, 1 in 3 of us, switch regularly to RCTV instead of switching to VTV and Chavez ideology and bad taste shows. Such a choice is not permissible in an autocracy.

If RCTV is closed and there is not outcry, no international sanction, then it will be a precedent and any broadcasting media in Venezuela will be closed whenever convenient for the chavista dictatorship (after closing RCTV we will be able to call chavismo a dictatorship, by the way, as it will have moved past the autocracy label).

If RCTV is closed expect to see more and more of Chavez in private media as it will be the only way to avoid the wrath of El Supremo.

If RCTV and Globovision are closed, expect to have no freedom of expression in TV or Radio. It is important to note, by the way, that RCTV is THE ONLY network of the opposition to have a nation wide reach; Globovision is barred in many open signal markets and can only reach all corners of the country through cable, cable being accessible by only 30% of Venezuelan homes. In other words, once RCTV is closed, the only non chavista nightly news that exist will have ended and all the open air signal will be neutral or pro Chavez except for Globovision wherever this one is allowed.

If RCTV is closed then we will witness the renewal of the censorship paradigm that all autocrats seek. This time lack of international response will be inexcusable: this is all about naked censorship. The only suitable response would be boycott of Venezuelan media, including the neutral one of Venevision and Televen who so far have remained dangerously silent on this matter.

Freedom of expression, one cannot compromise on that.