Venezuela and France : who has the best voting system?

Before I give a review of the great French results, the first thing that strikes me is the difference in the quality of the vote between France and Venezuela.

In a way it is not fair to compare both countries as France has a much longer democratic and institutional tradition than Venezuela, predating even the French Revolution. But the abysmal difference between the way French people and the way Venezuelan people perceive the results of their elections tells us quite a tale.

In short: after a mostly manual vote, counting every little paper one by one and communicating the results via phone call to the Interior Ministry in Paris (yes, that is right, the Interior Ministry, not some "independent" organization such as the CNE is supposed to be), 2 hours after polls close the said Interior Ministry publishes its first result with 63% of the ballots counted and gives a result that nobody contests. Oh, sure, some are not pleased by the result but I did not hear anyone on the news or TV sets mentioning the words "fraud", "unfair advantage", "sold out" or some assorted variation. All candidates have already recognized the results, even before the Interior Ministry announcement, as exit polls were scrupulously announced at 8 PM, Paris time. 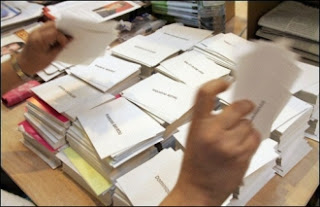 First, the French vote with little paper ballots such as in the picture next. That is right, when you get inside the poll station you are to lift yourself a ballot for EVERY candidate and go behind some curtain to stuff an envelope with a single one of these papers and then drop that envelope in a transparent ballot box. Now, how primitive can you get? True, this time there were some centers that were asked to try automatic voting but the first reports were rather negative: the French, well, they like their paper vote.

In Venezuela we all vote now automatically and yet half of us do not like it, do not trust it, would rather vote on paper as we used to do. And guess what? With automated voting we still have to make long lines wheres the frogs make at most a one hour line beofre voting....

In the French provinces polls close at 6 PM, but in major cities they close at 8 PM. Nobody complains about that and somehow everybody manages to vote in the allocated time. Amazingly there are very few polling stations that have to remain open after 8 PM, EVEN today when voter participation might have been the largest under the 5th Republic. In Venezuela the CNE is constantly tampering with voting schedule, which does not help in developing trust as suddenly the arrival of bus loads of people are reported... Oh! and no military around voting stations in France, whereas in Venezuela the military is increasingly intervening in the polling stations deciding how things should be run. 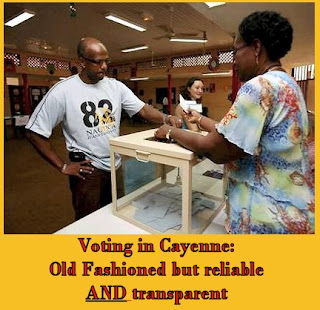 In Venezuela the CNE was created as a "fifth power" to guarantee the transparency of the elections. It has dismally failed as half of the country does not like it. In fact if we look at the political composition fo the country we can observe that the overwhelming majority of the opposition to Chavez does not trust any result emitted by the CNE and we can see that many within chavismo actually do not mind at all the partiality of the CNE, implicitly acknowledging the possibility of fraud. In France, amazingly, it is the Interior Ministry, a political position, which manages the elections and all agree with the result. Food for thought for Tibisay Lucena, CNE head, as she has been invited to observe the French elections. Hopefully she will learn something about it, or at least wonder how come people do not trust her in Venezuela.

And to finish the speed of results publication. In two hours the French Interior Ministry gives the participation and the results of 63% of the counted ballots. In Venezuela we are still waiting, as far as I know, for the complete and exact results of the legislative elections of 2005 where barely 15% of the people voted.

The lesson? Trust has to be earned and in an election it is important that all of the country trusts the electoral system, not only the side that wins as is the case in Venezuela. In 1998 nobody contested the result of the election that gave Chavez a victory. Yest, NONE of Chavez successive victories after that date has been truly recognized, has been considered as actually representative of the country political composition. As long as the CNE does not manage to get a 90% approval of the way it handles elections, the country will not find political rest. And as we can see from the French example, the problem is not really that the CNE is filled with pro Chavez people, after all, in France it is a political appointee that manages the elections. The problem is that as long as the CNE does not stop acting as appointed thugs it will never gain the trust of the country.

But of course we all know that it is part of the Chavez strategy: as long as the opposition does not trust the CNE, and it has plenty of reasons not to trust the CNE, then the opposition will remain divided between an abstention party and a voting party, simplifying greatly the fraud activities of chavismo.