As expected Chavez could not resist to make the Copa America his. From "ahora es de todos" the Soccer tournament went to "ahora es de Chavez". How come the Conmebol allowed 1) the silly and stupid speech of Chavez, something which was never allowed in previous editions of the Copa? and 2) this picture below (from EFE through Tal Cual)? 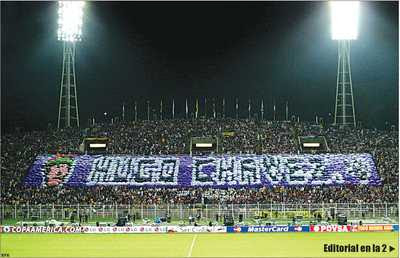 But meanwhile there is another country who bravely walked through the street of Caracas to defend its freedom of information and expression. And you know what? For the first time in years the opposition walked through a downtown area by reaching the Baralt avenue. A high view from Tal Cual and a color view from a faithful reader (YB), (click to enlarge). 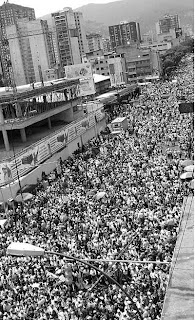 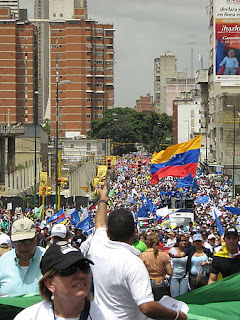 There are two countries, a mendacious one willing to spoil and international event for their beloved leader, and another country who marches bravely to defend its right not to be paid to host placards at the glory of EL Supremo.