Housing in Venezuela: propaganda and reality

Most visitors to Venezuela for the Copa America entered through Caracas Airport in Maiquetia. One of the first propaganda signs they would have seen, if they still pay attention after a problematic exit from an airport which seems unable to complete its revamping is the large sign with Chavez on the side of this apartment complex. 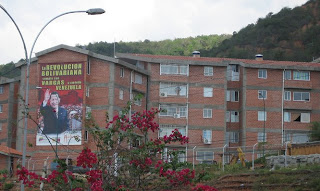 The poster pretends to demonstrate that Chavez is fulfilling his promises to Vargas state, while showing off the "subsidized" housing that he offers the people of Vargas. The poster of course does not mention the unaccountable delays since the 1999 disaster. It does not say that this housing and the area nearby the airport had to wait for the Copa preparation to see the improvement and recovery that should have happened as early as 2002. Though the heavy machinery in the right hand lower corner indicates that things are far form complete (click to enlarge any of the pictures of this post). Nor will it mention that the new bridge that visitors will cross within a few minutes of this complex was built in a rush because for the first 6 years in office Chavez was unwilling to address the problem of the crumbling viaduct, letting it shamelessly fall. As always Chavez fixes things when he has no choice, at criminally higher costs than what it would have cost the country if previsions had been taken on time.

Thus, justifiably incensed by such a blatant propaganda for external consumption I decided to dig a little bit deeper in the current housing situation in Venezuela. I will be fair and will start by the only good news: when the government builds subsidized housing for the people, it tends to be of a somewhat better quality than what it used to be before Chavez. Unfortunately he is not even building half of what was built yearly before his days, just as the needs of the country, with the population increase, are much direr than before his arrival.

From Yaracuy I get two recent examples of "massive" housing. It is important to note, by the way, that under Lapi there was not much building in Yaracuy, Chavez reserving his projects for friendlier areas. But with the arrival of Gimenez, in true autocratic fashion, Yaracuy got a construction boom of sorts. The picture next is the recent economical housing, which has an appreciable piece of land when you think of it. 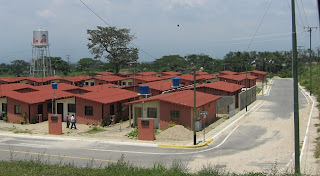 Still, the neighbors are quite close, there is no good place for a garage which is a problem to the few people that do own a car such as the taxi drivers. Security and privacy are a problem as already one of the houses is building a circling wall (right side). And the water reservoir of course must have the image of the beloved local leader, Gimenez. Personality cult is everywhere at every elected level. And while we speak of water, that water reservoir, Gimenez mug shot notwithstanding, does not seem to carry enough water for the first investment of some of the neighbors is to erect one of those ubiquitous blue plastic water storage that dot now the Venezuelan contemporary housing. Note: to get into one of such houses you better show up some good bolivarian credentials. If your name appears on the Tascon list you can usually forget about subsidized housing.

There is also subsidized housing of a slightly better quality, probably destined to public administration personnel (people like me must resort to bank credit). Curiously that housing does not look as good as the one above though it comes with more land and perhaps more space. It also comes with more insecurity: to protect against crime these neighborhoods pull together to establish a wall around the development and a vigilante spot at the entry. Note the concrete bench to wait for the bus, a more formal garage space in each house and the litter across the street. 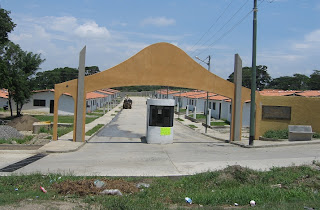 So, how many of such housing solutions is chavismo building? Well, through a search through El Universal (most pages of the government that would point out to official figures were down this week end) the numbers are not too encouraging. We can start with minister Carrizales promise to give 60 000 homes by the third quarter of 2006. It was an election year and the desperate government was trying its best effort at subsidized housing construction in 8 years. Unfortunately the global promises for 2006 were never met even though it was the best chavista year in government built housing since Chavez reached power: 77 000.

The graph below, an official statistic by the way so it might tend to promote the chavista effort, is still showing that Chavez has not down so well. For example he might have the best year since 1989, but the hated 4th Republic has the next three best year (and I suspect that 2007 will not overcome them as chavismo seems to have more pressing problems that housing construction, problems such as importing incredible amounts of food stuff). Ironically we can also see that under the hated pseudo neo-liberal polices of Carlos Andres in 1990-1992 we get a similar expansion of public housing construction, without benefiting of the huge oil prices that Chavez benefits from. And the drop of 1993 is entirely due to Chavez 1992 coup, a drop much less catastrophic by the way than the 2002. 2003 drop under Chavez, a drop that had already started in 2001, removing even the excuse of the 2002 coup against Chavez.

Yet this graph might actually be wrong. In another article El Universal states that Chavez only built 34 000 home sin 2006. Where is the truth? How can we evaluate it? should I go and count everything? Meanwhile the housing crisis seems to deepen: Aragua inhabitants protest a deficit of 150 000 only for their state! But to add insult to injury, with a straight face Chavez promised to go an build 200 000 homes in Nicaragua!!!! 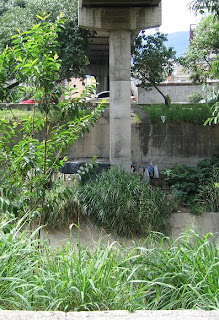 The answer is found elsewhere and I have pictures of it too. To start, the Copa visitor might have reached Caracas and got stuck for a few minutes in the usual congestion before the Botanical Garden. Leaning through the left window he will have spotted this housing, on the edge of the river sewer of Caracas, somewhat protected from the rain by the overpass coming from San Agustin. We wonder if the laundry seen drying on the right side was washed in the sewer. In spite of the Mision Negra Hipolita, indigence keeps unabated in Venezuela. You just need to open your eyes slightly, it is worse than ever, worse than when I did my pre-Mision Hipolita report.

Because the fact of the matter is that the pent up demand for housing access, no matter how humble this one might be, is reaching dramatic proportions. And the government does not realize that no state controlled society has never been able to solve the problem. The only societies that have come close to solve it are those which are able to provide decent jobs at decent wages, something impossible in Venezuela today as the private sector is slowly squeezed to death. And even then, such societies report squatters taking over old abandoned buildings all the time. Even if these buildings are a heath hazard, such is the desperation. Venezuela does not escape this phenomena and in fact amplifies it greatly.

Traveling through Venezuela since 2004 shows a stupendous increase of "invasiones". An "invasión" is a group of people that get together and invade some large track of land and build shacks. The idea is to force the state to either expropriate the legal owner of the land to give it to the squatters, or to force the state to give them houses somewhere else to dislodge the land. The strategy is of course well worked out: the lands are ALWAYS close to major roads, and thus quite visible, quite the eyesores. Until 2004 some opposition governor still in office like Salas Feo or Lapi were able to stem such squats, but now that they have been replaced by "people loving" governors the situation has become catastrophic as these governors have no authority to stop such squatting organized from within chavismo itself. Below I am posting a montage I did of such an invasion in Carabobo, close from the very chavista town of Moron.

This "settlement" has been done barely a mile from the center of Moron, on very valuable industrial land, on the main highway that links Puerto Cabello to the Occident of the country. It can hardly be anymore strategic. You can see it all, the children playing in the dirt on the left, the cardboard shacks, the carefully partitioned plots, the stolen electricity form the main grid, and even the small informal business such as collecting old tires. Obviously, no running water nor sewer. And it is much bigger than what that picture might suggest. The picture below is actually a street of sorts, starting at the green shack to very far right of the above picture. 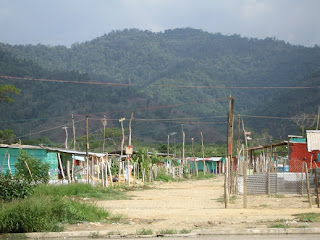 You can see there how complex the stolen electricity grid has become in one year. Because, of course, each year the government delays its intervention increases the costs of the government clearing up the area. By law, many of these structures can be claimed as "bienhechurias" and might deserve, with a good slimy lawyer, of some compensation. The legal owner of the land is very unlikely to get any compensation, unless the government were to build right there. And still, it would be very low, with no relation with the original commercial value.

If you drive from San Felipe to Caracas, you can count at least a dozen of such recent squatting settlements.

As it is always the case in the glorious bolibanana revolution, there is more than meet the eye. If chavismo is diligent in promoting the personality cult to the beloved leader, the inquisitive eye can find by itself that the truth told by the government is not the real truth. And one thus understands better the need of chavismo to close outlets such as RCTV, and eventually blogs, as the burning of the car of Roger Santodomingo makes us suspect the time is getting closer.

-The end-
PS: all pictures have been taken over the last ten days, in Maiquetia, Caracas, San Felipe and Moron. Being on the road slows down posting frequency but increases data for them.