As I predicted on June 11, eventually we run pout of pasta. 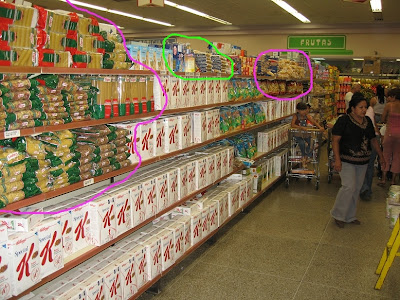 This is the pasta shelf at the San Felipe Central Madeirense on Friday 13 (!) July 2007. One year ago the whole shelf except for the two extremes (bread and instant soup, about 25% of the total shelf space) was filled up with at least ten brands of pasta, all sorts of variety and more often than not with stacks of pasta on the hallway itself, making difficult the shopping cart circulation.

Well, today the Central offers you a nice protein, dietetic option of Corn Flakes. Three, 3, types of flakes actually!!!! So you can have one in the morning, another one at lunch and the last one for dinner.

For those who do not know, after the Italian immigration of the 40ies and 50ies pasta has become a main staple in Venezuelan diet. To the point of creating some weird cuisine. For example Yaracuy is known for having invented the not very dietetic pasta and beans dish. I suppose that Yaracuy, a rather poor state, invented this combination to compensate for a low meat protein diet. Now it is a local specialty (also found in Lara, by the way).

But I am just mean and unfair: there is a little bit of pasta left, perhaps as much as 10% of what was usually offered. In fuchsia I have circled the local brands, the cheaper "Capri" and the most upscale "La Parmigiana" at the very end. However that last one seems to be the last dregs of what used to be on the shelf. Note: the Capri offering is reduced to not even half of the type of pasta usually offered. Oh, and in green there is a tiny bit left of Italian imported pasta. Usually imported pasta represent about a third of the regular offering but now what we see are some left overs which for all that I know might be close to expiration date or the kind of fancy shaped pasta that only Italians know how to handle.....

Mayonnaise is back, sort of.

Now we can find on, ONE, brand of cooking oil at least once a week.

But forget about fresh milk and white sugar or beef and chicken. Unless you re at the store opening for the later.

I think that from now on I will always bring with me my camera to the grocery store, though I doubt very much that Nazional guards at Mercal will let me take pictures.