Tal Cual carried a very interesting article that speaks volume about the increasing decrepitude of the Venezuelan economy, a decrepitude hidden very well by a sea of oil dollars that pay from frozen chickens to shinny Hummers.

The graph below plots the evolution of trade between the Andean Countries and Venezuela. It is to be noted before examining the graph that Chavez has decided to favor Brazil trade above Andean Community trade (the AC is formed by Colombia, Peru, Ecuador, and Bolivia since Venezuela left). Yet, the graph tells us quite a story about an economic reality that chavismo refuses to face. 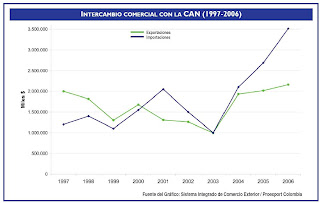 The first thing we can observe is that when Venezuela had a "normal" economy the trade amounts moved about with the same tendency. Then, when chavismo started its march to "socialism" and when the price of oil allowed Chavez to wave his check book as he pleased, the trends broke as the Venezuela green line was left far behind. Why?

First, until the year 2000 Venezuela was able to sell a little bit more than oil to its Andean partners. And even though importations were significant Venezuela tended to have a trade surplus. But since 2000 Venezuelan exports started falling and the reprise we see in 2004 is due to the increase of oil prices, and hence the increase in oil derivatives.

The article states clearly that Venezuela only exports oil derivatives and some steel to its ex Andean partners. The other exportations have all dried up due to the currency exchange control in place since January 2003. Venezuelan products have stopped being competitive: the government forces folks to export at the official rate and thus a currency overvalued by about 80% kills exports value. By the same token it is a boon for importers who can buy in Colombia stuff cheaper than what is produced in Venezuela.

This is particularly favorable to Colombia which shares an extensive border with us. As Venezuela agricultural production fails consistently to meet internal demand, when not decreasing its actual production, Colombians just need to send a few trucks across the International Bridge at Cucuta.

The trade deficit became a gap as early as 2005 and in 2006 it was downright worrying, if anything by the dramatic trend. With Brazil we cannot talk of trade gap, but rather of one way trade. Even Brazilians worry about their trade surplus with Venezuela as a few moths ago Lula worried aloud. Today El Universal reminds us that while it also comments that non oil exports in Venezuela have dropped from in 7,127 billion USD in 2005 to 5, 245 in 2006.

There is no relief in sight. In fact this totally uncontrollable gap has forced Chavez to admit that he might reconsider the decision to leave the AC.

The structural cause of the gap are not addressed by the government. The increasing imports of food stuff (creating even some problems in Colombia) are due to an increased purchasing power of the population which is good, I suppose, if we make abstraction that this increased purchasing power does not come form the work and production of the people but from the oil buried under our feet. That increased purchasing power is unfortunately combined with negative pressures on the agricultural sector. The politics of land grabbing have stopped private investment in the country side while the new cooperatives seem to be overall an unmitigated disaster as they produce at best enough for their survival. These new "social production" joints fail to offer any significant surplus that can be commercialized in the rest of the country. And the government has only itself to blame for that since many of this land grabs are coming at the expense of fully producing private concerns while the peasants brought in are pretty much left on their own not receiving all the help promised by the administration.

The first results are now in: Venezuela will have for a long time a chronic shortage of beef and dairy as the specialized cattle is simply not replaced. Beef we can import for the time being but milk is already in rather short supply in foreign markets. We can see that on our grocery store shelves everyday now. The worst part is that the government keeps its policy of seizing cattle grazing ranches while any effort at resettling seized areas seem to be failing. From chronic shortage we risk to move on to permanent scarcity. Soon, considering that the government is keeping up and even strengthening its policy to fix prices so as to control inflation we are faced with the risk that Colombia will refuse to keep exporting cattle unless paid cash by Mercal at prices well above the Venezuelan regulations. How long the government will be able to keep up a straight face on this is anyone's guess, but the long term damage is already done: Venezuela is probably now a decade away from self sufficiency in meat and milk, even if the correct polices were to be implemented today.

Sugar is also another chronic laggard on the shelf. White sugar has disappeared since last year and brown sugar seems not to be as frequent as it used to be even one month ago. Again, price control and land grab are to be blamed for it. And again, as ethanol production keeps going up in the world supplies of comestible sugar might decrease some and their price increase. Another item with which the government is going to find difficulties in pretending that things are fine.

Other items are also in trouble but not as bad as the ones above, thus no need to discuss yet the problems in chicken production, for example. Beans, on the other hand........ But the point is made: the policies of the Chavez administration have created a dependency on imports that favors even countries with which Chavez does not want to have any deal with like Colombia. Imports from Colombia are at the sufferance of Chavez as he cannot simply replace them with imports from somewhere else. And there is no sign that in the near future Venezuela will be able to reduce its dependency with Colombia, by very far the largest share of the AC trade. Right now, astoundingly, Venezuela imported from Colombia in 2006 3,125 while its exports to Colombia dropped to 631. For every dollar Venezuela sends to Colombia it buys back 5 dollars. How long can this last?