The Public Administration is at the service of the citizens and is based on the principles of honesty, participation, speed, effectiveness, efficiency, transparency, accountability and responsibility in the exercise of the public function, with total submission to the rule of law.

The public administrations are the organizational structures destined to serve as instrument to the public powers, for the exercise of their functions, and for the services they provide. The categories of public administrations are: the bureaucratic or traditional public administrations, that are those that takes care of the structures predicted and regulated in this constitution and the laws; and “the misiones”, constituted by organizations of varied nature, created to take care of the satisfaction of the most felt and urgent necessities of the population, whose benefit demands of the application of exceptional systems, and, even experimental, which will be established by the Executive authority by means of organizational and functional regulations.


What this art. 141 modification proposal means?

The original art. 141 only states the function of public administration, and it states very clear that it is intended to serve the citizens. In this proposed modification, it doesn’t state clearly the function anymore, and tries to define a form to accomplish an unclear function. I am not a constitutional lawyer, but constitutions should only state rights and duties very clearly. The form is rarely a constitutional matter, that is what other laws are made for. Let’s see if I can explain myself better.

This proposed reform has some relevant points that deserve the attention of all their citizens:

1.Public administration would not serve the citizens but through the public powers.

Why this is not clear if constitutions should be very precise bodies of law?

The devil’s advocate and Chavez can tell me, no! You didn’t understand why I was trying to say, you fool, the Poder Público is also the people´s, represented by this new power called “Citizen power” (or Popular Power). So the public administration, becoming a tool to the public powers and the citizen power will be the same as serving to the people, right? What? No, it’s not! It is not the same to say that people’s rights and duties as a community are the same as individuals’ citizen rights and duties.

It doesn’t have the same meaning.

If one dig deeper into the article that talks about what and whom constitute these “public powers”, one will find that Mr. Chavez is also reforming article 136, the one related to the public powers. In the proposed reform of art 136 the distribution of powers come divided in a territorial manner (popular, municipal, state and national) and as per their functions (legislative, executive, judiciary, citizen and electoral). Chavez is creating two new powers to give the impression of a decentralized autonomy between the government, but the reality is that there is no mention in the constitution that these powers must be autonomous. As a matter of fact, the whole constitutional proposal is aimed at centralized authority, and regulations. That’s why Chavez talks about it as a “block”. The only purpose for a country to structure its government into main powers is only to ensure that they function with autonomy in the most extended sense possible.

Hence, the “Citizen Power”, the branch of the public powers that will have the same constitutional weight as “individual citizens” in former constitutions, in reality won’t represent the people’s interest but the interest of the people who “put” them there in those jobs. Thus, it’s not the same thing as before the “reform”.

Venezuelans have to consider if this “affidavit” somehow violates the universal declaration of human rights. (art 21, numeral 3?)

What I am getting from all of this? This proposal is telling me, an individual citizen, to surrender my rights and duties regarding public administration to a public power that is not constituted by popular elections, so they can represent me. As a private citizen, as an individual, the only benefit I am getting is that this constitution will consider me an “organic nothing”… which, obviously, is not a benefit at all. My interest as a private citizen won’t be protected whatsoever in this reform and I won’t be able to complain, sue, and watch over the functioning of public administration. Can you imagine which levels will current corruption practices reach?

As a result of this modification, since public administration would not serve directly the people any longer, our money also won’t be working for you constitutionally speaking, but for the interest of the bureaucracy of the party who will control the Venezuelan state. Chavismo already controls it, but with a questionable legitimacy.

In conclusion, our public administration’s monies (Bolivares Fuertes or not) won’t be “ours” anymore, they would be intended for the public powers (and not the citizens), since this constitution is stripping us from our rights as citizens to be served by the state. If we received at the end some type of service form the public administration, we would had to thank Hugo for his graciousness in not taking it all for himself and his varied collection of powers, in his is sharing some breadcrumbs with us. Also, our very Venezuelan traditional right to complain (“derecho a pataleo”) will be gone since we wont have the constitutional right to ask for the services that the public administration owes us since, constitutionally speaking, civil servants are not legally bound to answer to you anymore, citizen of Venezuela.

As consequence of this lack of clarity into whom public administration should serve, our money will be funneled into the already gigantic and very greedy monster of Venezuela’s state bureaucracy, spitting it out and then swallowing it again for another loop (Chavismo always was best at inventing the hardest way to go from point A to point B). I can only think how hard would be for old folks and retired public office personnel to claim for their pensions and social security. It is a horror today where public administration still has to answer to the citizens, it will be hell when you have no right to claim but wait for a mision to pay you whenever they can, or want.

3.Why they took out the fundamental principles in which public administration should be based on?

The reform also erased the following from the 1999 original: “Public Administration … based on principles of honesty, participation, speed, effectiveness, efficiency, transparency, ACCOUNTABILITY and responsibility on the exercise of Public service under total submission of the rule of law.”

Why erasing all of this? Well, we saw in point 2 that Chavez is not precisely worried about handling money on an effective way since the amount of bureaucracy will become gigantic with this new constitution. It will be OK to misspend money. The public administration won’t have more constitutional accountability since they would not be required to give answers to any citizens on the things they do or not do, or the way they use money for. So, they all can misspend and do whatever they want without worrying of pesky accountability, not that they are too worried right now, but they have to work hard to cover up, and at the end of the day they know they are committing serious crimes to the nation, that the truth will emerge. With this new constitution, it would be only a matter of gossiping in any newspaper but mishandling money won’t be a crime punished it by law. Are you getting where all of this is going? Any official can be caught with a suitcase full of money, and it won’t be a problem since they can excuse it as some public administration affair. It would be much more easy to cover up any money mishandling.

Venezuelans might ask, but why this is so important? Our public administration during the 4th and the 5th republic have been always mediocre, and much very corrupted, so why worry that this article is been modified the way it is?

Because, my dear countryman, Chavistas are trying to wash their hands like Pontius Pilates so when this government falls it will not be possible to prosecute and hunt down the worst offenders to face justice. They want to dip their hands in the money and not be accountable for it, not even work hard to cover up their corruption deals, as simple as that. Bank robbery to the highest level. And, you can imagine the amount of people, citizens and internationals, who are salivating for this to happen, supporting this bullshit. 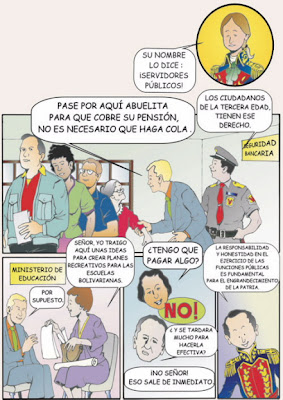 Graph taken from the official Venezuelan portal of the Venezuelan constitution of 1999. www.constitucion.ve.
Do you think the new article 141 reflect this graphic at all? For starters, you can erased the man at the last square, yes, the cartoon of the guy who looks like that Independence hero named Bolivar, talking about honesty and responsibility. And the old woman, she can wait at home for some misiones functionary, who for sure won’t be a catire like the one in the cartoon, to knock her door whenever he is allowed to pay her, or never.

Post written by Feathers, who writes her own blog.