It must be the day for telltale pictures. 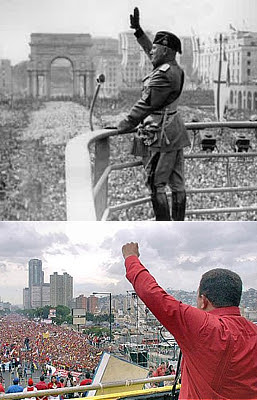 On occasion I visit "El salón de Monseñor de Talleyrand" and today I was not disappointed at all. I do not know if Monseigneur did the montage next or if he found it elsewhere, but it is one of those delightful coincidences that tells us so much about the fascist regime that Chavez is trying to install.

The article with the picture is worth reading to ( though in Spanish, sorry). There you will read about Carlos Fuentes recent interview in Argentina where he qualifies without even batting an eye Chavez as a “fascista típico” (typical fascist). You will also read about Bush and Chavez hot air while on the side they do brisk business. Or does anyone think that the Bolivarian Happening is financed by something else than US dollars from the very same Empire?

Curiously yesterday I was traveling visiting customers with someone from the US representing some technical product. Amazingly that person did not know that about 70% (more?) of Venezuelan oil goes directly to the US. In fact he thought that considering the poor relations between the two countries, the US had stopped getting oil from Venezuela. I suspect that on one in the US is willing to herald the obscene mutual dependence of Bush and Chavez. Insults make so much better sound bytes on TV nightly news.... If the US really wanted to get rid of Chavez it would have done so long ago in all simplicity: stop fast all oil importations from Venezuela. Within a month Chavez is out as there are not enough refineries elsewhere to process the poor quality of Venezuelan oil.