Last Wednesday I watched in Alo Ciudadano how VEA was using a picture from August 16 2004 to illustrate the alleged aggression of the students to perturb the UCV internal elections that had just been put under threat by the high court of the country. But I had to wait until today to find the picture in Tal Cual and write the story: the VEA web page is useless.

VEA is the official newspaper of the government, the wanna-be Gramma or Pravda of the revolution, and already even more inane than these two who have at least solid propaganda teams. VEA even hosts one of the key writers of the regime even if he signs under "Marciano": Jose Vicente Rangel himself, known in the past as a real journalists and today as the evil apologist. Nobody buys VEA to read except for some die hard old line Stalinist (Ponce of the Venezuelan old PCV is the editor). VEA sells a little bit only around public administration buildings where it is de bon ton to show your leanings. Promotions there can sometime depends on less than that. Once the public display is done, the happy purchaser can display it again at the bottom of its bird cage where red birds might read it.

Thus VEA had to cover the new judicial fraud and trying to start preventive spin on the announced chavista electoral disaster at the UCV today. Since there is no picture to drive future crimes, well, VEA had to borrow it from some archive. In fact it went to borrow the emblematic picture of August 16 2004 when chavista goons shot down a few people in Altamira square (Miguel even re-issued that picture last Sunday a great post on some of the killers of the regime!). That is right, VEA would have us believe that the picture they show corresponds to anti reforma students when in fact it belongs to chavista killers. 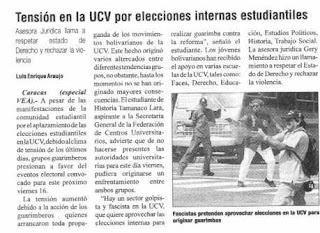 But the intellectual deficiencies of chavismo have long been exposed, their lack of creativity is well known and now we observe their extreme laziness at even trying to get a more plausible picture for their story. After all, I have lost track on how many times the logo of this blog, a picture taken at one of the opposition marches by yours truly has been borrowed by chavista sites unable to find among their own picture archives as glorious a Venezuelan flag as I have taken.