Even though I am deeply worried about the future of the country, something that I have yet to find the right words for it, 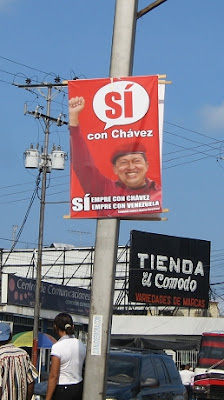 I still can observe the electoral campaign for the SI slowly unravel in utter banality and repression. That it might pay off for Chavez is of course a possibility no matter what the polls have been saying these past couple of weeks. What I wrote last May is being confirmed each day: the Bolivarian Revolution is dead. Now we just have a regime bereft of ideas who can only find in student repression and a reality show filming approach to the big star its only arguments for perpetuation.

Repression is now a given. Today we were treated to the students of the Simon Bolivar campus in Caracas pushed inside their campus by the Metropolitana police. Since the police cannot enter the campus, they kept throwing canisters of tear gas above the fences and shooting rubber bullets by passing their guns through the chicken wire that circles the campus. I can hardly think of any thing more cowardly risible than what the Caracas police did today, shooting defenseless students from afar while perhaps this very same week end the police failed to stop as many as two dozen murders in Caracas alone. But when did fascism worry about current crime?

Unfortunately today student repression was not an isolated incident. It has been going on steadily for a couple of weeks now, even including torture for some Barquisimeto students. Not to mention the Monte Avila students dragged on the streets of Caracas...

The campaign for the SI has taken a new turn. As I predicted last August it has gone full swing associating Chavez with the SI. A vote for the NO is a vote AGAINST Chavez, and any chavista who thinks it is OK to vote NO this time will become a traitor "El que diga que apoya a Chávez pero va a votar por el No es un verdadero traidor." "Whoever says that they support Chavez but is going to vote No is a true traitor". Would you like to have your name end up plastering the walls the way I found this one today in San Felipe, sending Baduel to the shooting squad?

The SI campaign has given up any attempt at actually discussing the reform proposal. Even the sweeteners such as the 6 hours work week have been shown to be of meager effect in attracting sympathies. Soon enough, in fact very early when the National Assembly started it process of consulting of the people, a consultation where opponents of the reform were either barred from entry or booed by the chavista crowds, hordes?, it was clear that the constitutional reform was an indefensible project. The CNE offered a debate. The debate was canceled because the SI campaign did not send any one to defend the alleged greatness of the reform.

It is not a matter of saying that chavismo is fascist and fascists do not account for themselves. It is not a matter that chavismo does not have any one good enough to discuss in a public forum: they do have plenty of hacks for that. No, it is very simply because everyone within chavismo
knows quite well that the alleged reform is only an instrument to allow Chavez to stay in power for ever. And that, my friends, there is no way to defend in a democracy. Thus the logical implication of the end of the campaign: stop debate, turn the vote once again into a plebiscite on Chavez. With Chavez all, outside of Chavez nothing. It can hardly get less democratic than that.

This goes a long way to explain the disastrous foreign policy of Chavez this month, going from failure to failure, even worse than during the UN attempt at gaining a security council chair. In a short month Chavez has managed to perturb relations to different levels with Chile, Spain, Colombia, France, Guyana and many OPEC countries. Without a single success to count unless this week end constitutional coup in Bolivia can be counted as a success. How can you manage an efficient foreign policy when your life becomes some type of reality show where you try desperately to gain the favor of other participants before they vote you out of the game?

And thus we have reached the last week of campaigning, in yet the more miserable campaign we have been subjected to since Chavez reached office in 1999. New heights in infamy are sure to be reached. For example today we saw the communication ministry issue direct TV advertisement to promote the SI, and to add insult to injury, using the free air time allotted by the RESORTE law to the government to pass educational messages. Today they thus started using that time directly for plain electoral propaganda, violating the law, in front of a CNE more passive than ever, more partial towards Chavez than decency would allow.

But then again, rarely I have seen such an admission of intellectual failure. 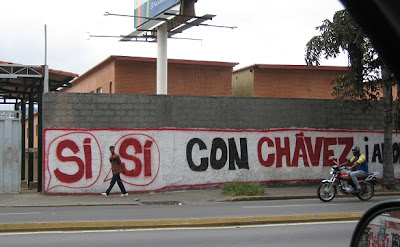