Patents and the decline of science and technology in Venezuela

In May I posted information published by the National Science Foundation (NSF) that discussed science and engineering in Latin America. In it they reported that Brazil, Argentina, and Mexico have been trending upwards in technology development to become "high-tech exporters". Not surprisingly Venezuela ranked the lowest of the countries scored, mainly because: "[it] suffered because it was considered the riskiest or least attractive site for foreign investment". Instead of stimulating foreign and domestic investment and encourage technology development, the Chavez government has made decisions that adversely affect Venezuelans competitiveness and economy while currently they are taking steps to further discourage innovation. Specifically within the constitutional reform, to be voted on December 2nd, a modification to article 98 is planned. The original article states:

Cultural creation is free. This freedom includes the right to invest in, produce and disseminate the creative, scientific, technical and humanistic work, as well as legal protection of the authors rights in his works. The State recognizes and protects intellectual property rights in scientific, literary and artistic works, inventions, innovations, trade names, patents, trademarks and slogans, in accordance with the conditions and exceptions established by law and the international treaties executed and ratified by the Republic in this field.

Cultural creation is free. This freedom includes the right to cultural diversity pertaining to invention, production and dissemination for creative works, scientific, technological, and humanistic, including the legal protection and rights to the author for their work. The state recognizes the rights of all to participate in the cultural community, enjoy the arts, and participate in scientific technological progress, and enjoy their benefits.

The most concerning aspect of this reform is that it limits protection to cultural diversity, to the exclusion of any protection that may be strictly intellectual or economic. In addition, the term "cultural diversity" is non-specific, how should one define it or interpret it? More than likely the interpretation will be left to the court system which is controlled by Chavez.

A simple interpretation of the new article suggests that most science and technology would not be protected since most do not contribute to cultural diversity. There are countless examples of how this will affect Venezuela, from books to merchants with the sole goal of bringing everything under state. State control has proven to be inefficient and a hindrance on scientific and technological progress, the participation of the private sector and intellectual property protection is essential for it to flourish.

It is clear that the Chavez government is reforming and will interpret the new article in a way that will significantly decrease intellectual property rights and severely limit patent protection. In the words of National Assembly member Carlos Escarra these are economic (i.e. capitalist) rights not cultural rights. Cultural rights constitute art, poetry, and literature whereas "inventions" have economic benefits. Apparently, Escarra fails to realize that art, music, and literature do have economic benefits to the inventor, through the sale of their work.

It is unfortunate that the new reform is designed to decrease patent protection since it is well established that patent protection, along with property rights and decreasing state bureaucracy play key roles in spurring innovation and economic development, ultimately leading to decreased poverty. This is not a new concept, but Chavez seems intent on creating a society based on a barter system and where some of the most important technological advances, such asOrimulsion is being phased out while giving the Chinese the technological knowhow for production while collecting little to no royalties.

The proposed reform to article 98 is simply putting on paper what the Chavez has been doing for years, either directly or indirectly though his actions. To see how Venezuela has declined in technological innovation we can look at the number of U.S. patents awarded to individuals in Venezuela (see graph below). 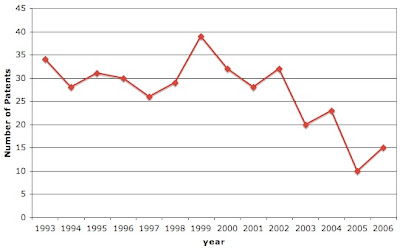 In the graph we see that Venezuela averaged about 32 patents a year from 1993 to 2002. From 2002 to 2006 the number patents dropped sharply to 15 after hitting a 13 year low of 10 in 2005. The most probably explanation for this sharp drop in patents is Chavez's decision to purge PDVSA of political opponents, particularly those such as the PhD investigators at PDVSA research institute (INTEVEP), where 66% (108 out of 164) were fired. The loss of highly skilled/educated individuals comes at a huge loss to the State, making it less competitive, reducing innovation and investment, resulting in a less diverse economy and loss of potential revenue. The loss of these investigators is particularly damaging to PDVSA since it accounts for the bulk of the economy and requires technological innovation to stay competitive among the other oil companies. Sadly this loss is long term since the time and investment required to create a highly skilled worker with a PhD is high, approximately 5 years of education and $300,000 not counting the experience needed post PhD. Making the Venezuelan situation worse is that most of these skilled workers have left, and/or have been prevented from working in Venezuela, thus they have emigrated and sought jobs with other petroleum companies taking their knowledge and skills with them. So who loses? Venezuela.

Over the years we have seen how Chavez has made decisions that adversely affect innovation in Venezuela, now the Chavez government is poised to modify article 98 which will further discourage investment and innovation that will not only affect the oil industry but the wider economy. The Venezuelan chamber of franchises has already stated that modification to article 98 will negatively affect that business sector, which has seen significant growth recently and now accounts for 2.2% of the GDP.

The modification of article 98 is an obvious decision by the Chavez government that will only lead to decreased technological innovation in Venezuela. However, this is only one decision, although a significant one, among many that Chavez has made during the past 10 years that will adversely affect Venezuela for many years.