The perception of fascism in Venezuela

I was reporting about the Thursday march in Caracas where a few students were beaten up by the Metropolitana, and a few Metropolitana Policemen were threatened by the dissident anti “reforma” students. This is becoming an almost routine post in this blog.

There were several comments by readers, in particular one that made me think for a while. The writer of that comment, Gene Zviter from Harry’s Place, mentioned justifiably that in the war of images it was not a good idea for the students to attack the security apparatus of a supposedly democratic country. I did agree with Gene in my response but it still left me with that “missing” feeling. Today I realized what was the problem: Gene still looks at Chavez and chavismo through a democratic lens filter. Now, Gene is someone quite aware of the reality of chavismo even as he comes from the liberal-left of the US. Often in his blog he has demonstrated his dislike for the authoritarian and pseudo social revolutionary posturing of Chavez. He is one of the few Liberals who early enough realized that my vigorous criticism of Chavez did not come from some right wing background. We are not talking here, at all, about some naïve foreigner expressing a passing interest about Venezuela. We are talking about someone who for years has been criticizing Chavez, before almost any leftie blog did (many now are joining but Harry’s Place was a pioneer, and a much reviled one among the simple minded philo-chavistas that haunt these pages).

What we are talking about is someone intelligent and well informed that still does not quite fully see the evil behind chavismo. Why is it so? Where is the communication failing? Or is it that in the XXI century people simply cannot believe that Venezuela is slowly and willingly succumbing to ghosts that were supposed to have been discarded for good between the Fall of Berlin and the fall of the Berlin Wall.

Then this morning I found these pictures published in Tal Cual Friday. I am posting both of them with their legend. They need no comment, just context.

In the first picture we get a bike with two guys riding. One gets down and runs toward an isolated student a few yards from the main body of the march. He was not that alone since there was another student who managed to take these damming pictures. 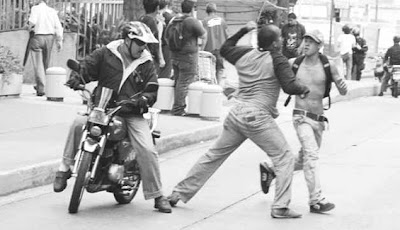 In this second picture we see the moment the student gets hit treacherously. 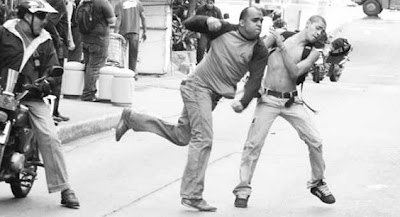 Then the legend accompanying the pictures in Tal Cual tells us that some of the students not too far form there quickly came back to help, the two guys on the bike left and went to get refuge BEHIND the Metropolitana lines, just as the chavista hecklers at the CNE did when the Nazional guard did “contain” them. The passenger on the bike had a red cap badly hidden in his pants

It is difficult for an outside observer to realize how partial the security apparatus of Venezuela has become. And I guess it is becoming inconsequential for us to the point that we do not bother that much in explaining that fact outside. We have become so used to the state defending chavistas and ignoring anti chavistas, when not attacking them directly, that we just are beginning to see it as a normal everyday life occurrence. This does complement the reply that I gave to Gene two days ago: the students were roughing up some of the police barricades because they have long stopped seeing the police has a security system, put there to protect them from themselves, from chavista hecklers, from thugs seeking to rip them. The students at that barricade saw the Metropolitana police as uniformed agents of the regime that were there to repress the students as soon as the order or the opportunity arose.

Now I do not want here to imply that the Metropolitana Police is all like that. In fact many of the reports from the Students are witness of the willingness of the Metropolitan to let them go by, to even help them if necessary. But the rank and file must follow orders, even if they despise the orders and those giving them. It is also true that since Barreto is the Mayor at Large of Caracas the Metropolitana image has degraded to levels unheard of before. Newspapers often carry in the red pages accusations of Metropolitana officers participating in robberies and assorted crimes. Newspapers often report crimes where the victims first went to the media before going to the police, so little trust the population at large has for the police corps, even if they do not live in mostly anti Chavez bastions.

I can bring up again my own experience here. I have been victim of robbery twice in my apartment in the past two years. I am not going into the details. Suffice to say that the first time insurance covered electronic objects that had been stolen and thus I had to do a police report. Of course nothing happened out of the "investigation", the police did not even bother collecting the evidence that I pointed to them. The second time I was robbed since the "visitors" did not take anything of great value, well, I did not even bother reporting the robbery. Would have the forced door evidence and the broken padlocks impressed the police this time? As an “escualido” I know perfectly well that I rank at the bottom of the piles of cases to follow. That is, there is no justice for me; I just have to be extra careful, hide my valuable objects or get rid of them. The police is a bureaucratic agency I go to when I need to file an insurance claim report. Period.

That might be sad, but what is sadder is that this reasoning I just expressed goes at every level of society when you are an “escualido”, an opposition, a dissident student, a church member, whomever is not obviously supporting the regime. That is why violence is growing in marches: we do not see the security apparatus for what it is, a security apparatus. We see them now like the enemy. Period.

And thus for people like Gene who cannot see that. Because simply put, they are fortunate enough not living through such a thing, because where they live they cannot see it happening. But if, of all people Gene, who does get it a lot still does not see quite well this point, how can we expect much less informed people to see this degradation of Venezuela society?

Obviously I am not supporting attacks to the Metropolitana as I know two things: 1) it is exactly what Chavez seeks to get the excuse to unleash outright repression and 2) It makes for good pictures but in the end it does not help much our cause. Though I could also add that when the Metropolitana sees students so aggressive it might have the effect of scaring them as most of them are not in the mood to kill anyone to begin with. Famed regimes fell because the security system refused to follow in the ordered murders, just as it happened in April 11 2002 when the army refuse to abide the orders from Chavez that could have resulted in thousands of people killed.

Meanwhile it is an added challenge for me, for the Venezuelan opposition, to find the words to express, to convey how rotten Venezuela society has become, and how it is exactly what Chavez wants, to create the permanent social violence, to get us used to it, a situation that characterizes totalitarian regimes such as Cuba, and will characterize soon enough the not so light version of it that Chavez is trying to create with the constitutional changes announced officially yesterday.