The CNE to this day has not published the detail of the 2007 vote and we might not get it until sometime in January. So far we only have the first bulletin vote with details of SI versus NO on a regional basis. But there is no result from embassies, no numbers on local abstention, just the global abstention of the second bulletin at 43.95%.

On the surface the results seem to be quite clear: the NO managed to get almost 2 points ahead of the SI, the constitutional reform that would have made Chavez an almighty leader was rejected, and Chavez got his first electoral defeat in 9 years, but it is a close one and he should rebound easily.

Nothing could be further from the truth: Chavez did receive a severe defeat and his ability to bounce back is seriously compromised. The reason is very simple: considering all the extraordinary advantage chavismo had coming into the contest, and an extraordinarily unfair one at that, that the electoral armor has been breached could provoke a significant and permanent withdrawal of support from a large sector. The psychological effect here is tremendous and the reactions from Chavez himself in the days that followed the vote are more than enough to establish that fact. The only thing chavismo has going for it is that the opposition might not be ready to capitalize on this disenchanted electorate. It is in a much better position than what it was a year ago, but there is still nothing within the opposition that indicates that it could reach power in less than a couple of years on its own merits. And we all know that two years in politics is a life time….

Why was Chavez defeat such a stinging one. First there was the basic error of the campaign, to make the vote a plebiscite over Chavez. Thus the vote annuls the brilliant result of one year ago. It does not annul it enough to question the Chavez stay in power for a few more years, but it makes Chavez an effective lame-duck president for 5 years. Unless of course Chavez chooses non democratic ways to act and in this case he risks very much to see his tenure shortened real fast. But in the unlikely prospect that he decides to be more of a democrat, he faces one serious electoral hurdle in October 2008 and the prospect that the opposition could take upon itself new constitutional moves that could result in curtailing his term of office. It is simply amazing to see how a man who had so much power in December, managed to squander a lot of it in his unnecessary search for more power. In this play there is a strange mix of Lear and an evil Prospero gone vaudeville.

The key to understand this is to analyze carefully the abstention pattern, at least as much as the CNE results can be trusted, or are even complete. It is clear that if Chavez lost a lot of voters, the opposition also lost many of its own. It is that difference that gives our first hint at how difficult it is for Chavez to bounce back to his former preeminence since he has much more ground to cover than the opposition.

But there is a second “shocker”: the opposition made up its own abstention losses at chavismo expenses. Electoral wisdom says that once a voter has crossed the line, for whatever reason, it will be much easier for the said voter to cross it again and again. Does anyone remember the Reagan "Democrats"? True, these “new” electors have come over form a wide variety of reasons, from their admiration to the student movement, to their dislike of the proposal going through the beginnings of a simple dislike of Chavez after so many years of dumb love. Chavez certainly has not been likable this past year, but still, that does not mean that the opposition to Chavez has a lock on these votes. But the tide is now running in its favor: patience, field work, and new ideas will eventually remove chavismo from office. The students have the ideas, UNT and PJ have the patience now, and all are starting to understand that elections cannot be won without reaching to the voter.

To come to these conclusions above one needs simply to compare 2006 and 2007 result, examine how the abstention has moved and look closely at some very interesting regional variations. This will be done in the next two posts on that matter.

PS: as a coincidence as I post this article written already a couple of days ago (I had to at least put down my scheme for the rest of this three part series) Weil regales us with a great cartoon: the three gifts that the opposition got this year. 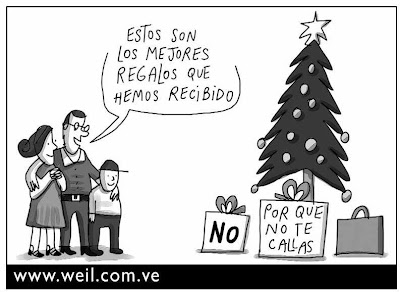 Of course, the NO result, for the serious stuff.
For comic relief the King of Spain now famous words found even in Cel Phones ring tones.
And the bag with 800 000 dollars, sure to be the Grinch that stole Xmas from Lady K. and Ego Chavez.

And the happy family thankful for the three best presents they could have received this year.

Email ThisBlogThis!Share to TwitterShare to FacebookShare to Pinterest
Labels: referendum 2007