Today is Easter and also the end of two weeks away from easily accessible internet. Thus, since it is Easter, and according to my counter most readers have deserted the blog for the week, I decided to restart posting with a piece of good news: evidence that the media communication offensive of Chavez is destined to failure, no matter how many millions he sinks in or how many media he manages to close. He might manage at best to reduce the flow of information that proves the failure of his regime but he will not be able to stop it. The evidence came to me surprisingly examining a set of pictures that I took at day break on my way to the airport for Mexico. Taking advantage of my new zoom lens I wanted to picture the huge slums that are on the Planicie Tunnel, to show how little things have changed after 9 years of chavismo. 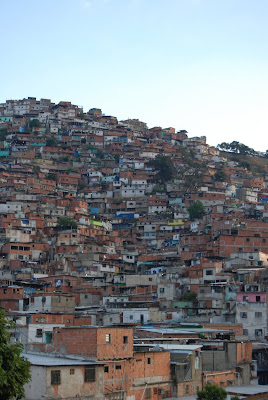 But if the above picture speaks for itself as to chavismo overall failure, another one gave me quite an hindsight as to how fed up people are with Chavez cadenas. 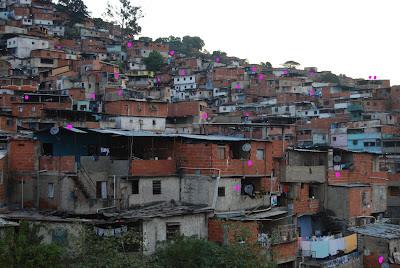 In this image where I was trying to illustrate from closer the living conditions, the first thing that struck me was the amount of satellite TV dishes, Venezuelan Direct TV. After all the precarious existence of the dwellers is obvious, again after 9 years of chavismo. What is less obvious is the amount of satellite dishes, something that did not exist there 9 years ago. How come at the very least 10-20% (I was able to distinguish 24 dishes, marked with a pink dot next to them) of these homes are paying the most expensive cable system in Venezuela? Click to enlarge and to see if you can find more dishes than I did.

On the practical part, land line cable is simple very difficult to set up in such areas. Besides investment cannot be recouped for the very simple reason that illegal connection will bloom as soon as a network is set up. Chavismo has been terribly lax with property, material or intellectual, and cable systems are simply defenseless against piracy in Venezuela. Thus the inhabitants have only two options: Direct TV of free open broadcast signal.

Unfortunately open broadcast is less and less of an option. RCTV was closed last year and as such it created a major "entertainment" problem in that it was a major source of soap operas. These days the major news network Globovision is under serious threat of been closed in turn. But the other two private networks have censored themselves a lot on the news front and have not been able to step in to replace RCTV in entertainment as people simply resent the fact that they have no more choice between soaps: there is only the Venevision soaps, the Brazilian soaps of Televen and that is that.

But the key factor here is the constant intromission of the government in the broadcast system. First there is the "cadena" problem where the government hijacks ALL TV and RADIO signal SIMULTANEOUSLY for AS LONG AS IT WISHES to pass any propaganda or speech of Chavez. These can last several hours and that night, well, there is nothing on TV but the same vociferating Chavez in any dial number. If that was not bad enough, the government has barred new private networks to emerge while it has increased the state owned networks. From the original VTV in in 1998, now we have also ViVe and ANTV, Tves upon the ruins of RCTV, and in Caracas Avila TV, the nationalization of one small operator into Telesur, and some other local stuff, plus some private but cryptic pro Chavez such as Canal i. In other words, as the private sector is squeezed out of media, the state increase its presence with mostly propaganda, political programming and lousy entertainment.

So what is the harassed worker to do, the worker who had to leave the hight of his hill before day break and who probably returns past sunset to his home? He wants entertainment, mindless or not, and VTV will not give it. Thus he needs to scrap all the money he can to get a satellite dish.

Now this is very bad news for Chavez because banning for example Globovision from open air broadcast in Caracas will not work. First, if the closing RCTV was a PR disaster, the closing of Globovision will be the official end of freedom of expression in Venezuela. The national and international consequences this time will not be as easily avoided.

But second and more important, hiding information that exposes the badly manged country will not be possible. While I was away we had the fabulous border concert organized by Juanes for peace in Latin America. Well, if you looked at any of the state media listed above you would had never known that such a concert took place, and even less of its success. Unfortunately for Chavez such news reaches the population. So, even for those who do not have access to Direct TV, those who cannot afford it, they will still manage to know those who have access to Direct TV and in time of trouble will ask them what is really going on, or bring a six pack of beer to split with the dish owner at news time. With only 10% of barrios already having a satellite dish, news cannot be hidden anymore, CNN is not subjected to cadena, RCTV neither and if Globovision is kicked out of open air broadcast it will also be exempt from following cadenas. Only open signal networks are subject to cadenas. Paradoxically information might circulate better, have more impact as even hardcore chavistas will start to suspect that government is really trying to hide stuff.

No matter what minister Izarra is saying trying to justify his job to Chavez, chavismo will either fail or will be forced into suppression of freedom of expression.