Last Monday I posted on the dismal role of Venezuela at the Olympics. Not the athletes, mind you, 109 of them managed to qualify and did, at least most of them, their very best. No, the failure as usual is the Venezuelan state, a system aggravated under chavismo where sports have become a political flag, something that never happened before, or at least nowhere close to the obscene propaganda we were subjected to before Beijing. But some readers did not like my post and thus in an unusual step I am posting a complement to that previous post, not a fun one as the title of this post indicate. It will take the single graph below and a few extra lines. 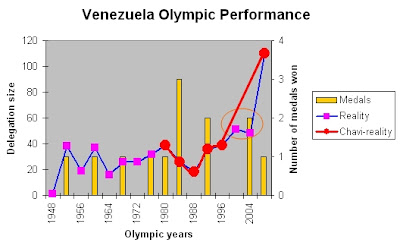 In this graph you have three lines. First, the blue line is the size of the Venezuelan team since 1948 when a single athlete was dispatched. As you can see, the amount of Venezuelan athletes that manage to qualify has been rather consistent since 1952 (when the latest dictator in search of popularity managed to rise the delegation from 1 to 38 athlete, a feat that Chavez could only hope to do one day; but then dictators were efficient whereas today, well, you know...) We thus go from a low of 16 in Tokyo 1964 to a maximum of 51 in Sidney in 2000. It is interesting to note at this point that this 2000 result is the last one that can be attributed to past administrations, the positive trend that Chavez inherited when he came to power on February 1999. It is also worth noting that in 2004, the first year Chavez policies can take some credit (they certainly will never accept the blame), that number dropped slightly to 48 athletes.

The second line in red, chavi-reality, is the one that chavista propaganda has tried to present us before Beijing. It is deeply flawed for one main reason: it curiously omits 2000 and 2004 from its announced years as you can still see on the Quick Time video at the Propaganda Ministry. If it is true that we jumped above 100 athletes it is also true that for the first time we qualified three teams. If you remove these athletes and their backbenchers, well, we would fall back to our usual 40-50. No word of that on any chavista page anywhere. So yes, let's be, as Venezuelans, happy that we now can have teams qualifying, even if they did almost dead last at Beijing: at least they will have gained experience and in four years they should do better (well, not Softball who will be out).

The rest is just the marker medal, with a maximum of three medals at Los Angeles in 1984. Truly, there is nothing worth writing home after ten years of chavista bureaucracy directing sorts: we are equally good or equally mediocre depending on your half glass of life philosophy.

The orange circle is just to stress the two missing years in the "official" story. But chavismo is already erasing people from pictures, public places and so, in the good commie tradition. I leave you with yet another example of the pre-Beijing propaganda. It comes from the day Chavez gave the flag to the team: look at it for a while, it is a shor 2 minutest, observe that the 109 athletes were not at hand (some knew better?) and how he wastes their time for his glory. Nothing new, really, the same tasteless to vulgar abuse of power we have been used to for the last 10 years with the lack of constructive results attached to such type of messy rule.