When scientists stop being scientists: IVIC direction sucking up to Chavez!

I found in my mail box this IVIC communique, sent to me by a scientist friend of mine. IVIC is supposed to be the top research center in Venezuela and as you can read for yourself it seems that at least the scientists that form the direction of the IVIC have renounced to their scientific persona. Click to enlarge. 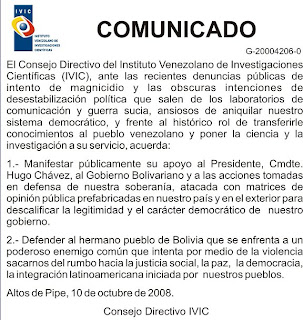 [We the IVIC board]...in front of the public accusations of "magnicidio" attempts and the obscure intentions of political destabilization that come out from communication and dirty war laboratories, eager to annihilate our democratic system, and in front of our historical role to transfer knowledge to the Venezuelan people and to put science and research at their service, we agreed on:

1- Manifest publicly IVIC support to the president, Comandante Hugo Chavez, to the Bolivarian Government and to the actions taken in defense of our sovereignty, attacked by public opinion matrix [sic] prefabricated y our country and abroad to disqualify the legitimacy and the democratic character of our government.

2- [comes something about Bolivia that is off topic]

From this we can see again why is it that rarely scientists enter the world of politics because, well, they suck at it as you can read by yourself. Getting into politics is as alien to science as possible and the board of IVIC by signing such an uncalled for communique shows to us that they have stopped being scientists, that any inquisitive and critical faculty that they might have enjoyed at some point in their career has been duly erased in order to praise their new sovereign. Heck! they do not even know anymore the proper definition of the word "laboratory"!

I have a close friend in IVIC and in my past scientific career I even went there to present the results of my work in the US, thinking naively at the time that perhaps I could apply for a job there. Quickly I realized that for bureaucratic reasons it would probably be easier to become a faculty at Harvard than a dishwasher at IVIC. So, if already then it was difficult to deal with the IVIC structure imagine how it is now that chavismo has managed to impose a direction board AGAINST the wishes of the researchers. Truly the working conditions of the remaining scientist at the IVIC must be near unbearable when they read communiques such as this garbage shown above posted on their name. I hope that at least a few of them will have the wits to send such texts to Nature and Science editorial boards to warn their international colleagues of how low science is falling in Venezuela.

What next? A Venezuelan Lysenko?

PS: you can find this communique in the IVIC news page by downloading their newsletter here.