This fearless blogger has done some investigative blogging at lunch. Having read the BigMac Index at The Economist I felt compelled to eat my first BigMac in at least a couple of years (I am more a chicken sandwich guy). 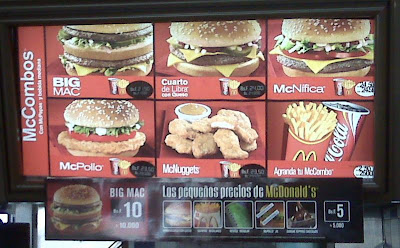 The first pic is the marquee at the San Felipe McDonald. Imagine that... You can see at the bottom left the special "little prices" of some of their products; thus I got a bargain deal to make Venezuelan currency look really much better than what it really is.

In short at 10 BsFuertes a Venezuelan BigMac on special is worth 4.65 USD at the official exchange rate of 2.15 for a dollar. But at today SWAP exchange rate a Big Mac is actually 1,79 USD (the rate is 5.6). In the US a BigMac normal price is 3.54 USD. So, how over-evaluated the Venezuelan currency really is?

Thus we can conclude two things:

The BigMac value of the Venezuelan currency is at least 2.82 BsF for 1 US dollar (more in fact if we were to take the normal BigMac value).

The SWAP rate of 5.60 is thus too high and due strictly to speculative pressure and government mishandling of the economy. In other words if Chavez were to devalue once and for all to 3 BsF for one USD, we would get a much healthier financial system, CADIVI could relax some and travellers could get back their travel allotment of 5000 USD, WHILE at the same time the government would get more income disposable to subsidize food for the poor only and not general subsidies from gas to food in order to win elections at the expense of an over-evaluated currency.

But that would make it a serious government, something that Chavez would be caught dead before apparenting.... Or so it seems some days.