Lula knows he screwed on Venezuela and Chavez

I was watching today an interview of Brazil's president Lula da Silva on CNN, conducted by Fareed Zakaria (1). The interview was very interesting. Lula has answers to everything and rather thoughtful answers (for example his thoughts about expanding the UN security 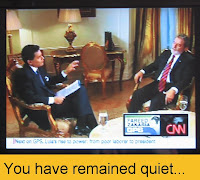 membership and its role). He might be an union worker in origin but that has not stopped him from learning a lot along the way. However all his self assurance was sorely tested when Mr. Zakaria asked him on Chavez. The approximate transcript first, click on pics to enlarge (2).

Zakaria: You are regarded as a great symbol of democracy in the Americas [more flattering comments follow] And yet some people say that you have been quiet as Hugo Chavez has hollowed out and destroyed democracy in Venezuela. You have greeted him as a friend, you have not really criticized the complete reversal of democracy in Venezuela. Why not speak out about it if Brazil wants to take a greater role in the world? Would that not be a part of it, to stand for certain values?

Lula: [during the question it was fascinating to watch Lula's face: from dead serious he put up a laughing grimace without noise, something clearly designed to hide his real thoughts and trying 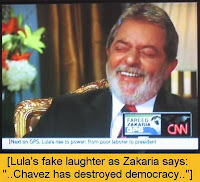 to ridicule the question which coming from that kind of interviewer is simply not possible to do and demeans Lula more than anything he could do to demean Zakaria] Maybe we cannot agree with Venezuela democracy. But no one can say that there is no democracy in Venezuela. [some strange and irrelevant mumblings follow about him having less years than Chavez in office and that Chavez went through so many elections while he himself went through only two]

Zakaria: Wouldn't you like to have had the advantages he has when running with the opposition muzzled, his gangs out in the streets. This is not real democracy. 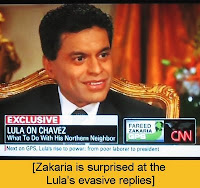 Zakaria: How we would do that? [reminders of Chavez insults to the US follow]

Lula: [he goes on with a lot of bullshit totally irrelevant to the previous questions. Then there is a talk about generosity] With an economy the size of Brazil we have to make gestures of generosity to our neighbors because otherwise they will have the right to think that Brazil is an imperialist power, that the US is an imperialist power, because there is development in our countries and there is underdevelopment in their countries. I believe the results that we have managed to achieve are good ones, I would say for Brazil, for Latin America and for the rest of the world.

How can we possibly put a good spin on this section of the interview? Even Zakaria looked surprised, and more than once. After all, the idiocies of Chavez are simply public knowledge and glossing over them would have actually been better for Lula than to try to skip the questions outright as he did.

So this is my story to try to make sense of this rather pathetic moment. Let's start with the salient points.

First, of course, Lula might have learned a lot in his career but not as much as he should have on Venezuela. His demeaning comment on Political Culture (repeated, incredibly, three times) simply tell us that all that he knows about Venezuela comes from Chavez. He might have received accurate reports form his foreign office but clearly, he has been very selective about what he chose to use. And pray, do tell us, when was it Venezuelan political culture to insult the opposition from a position where this one cannot reply to you? This is so offensive that I rather stop now on this part.

Second, there is that mercenary aspect to him: he cites the Brazilian investments as an excuse; which is not and excuse, otherwise we could excuse the US and many other countries of a few crimes because, well, you know, they invested. And this is made even worse when unprompted he excuses himself about Brazilian imperialistic tendencies. Truly Chavez brought the worse in Lula and made him blabber.

And third there are clear escape attempts at not replying at all to Zakaria questions. At 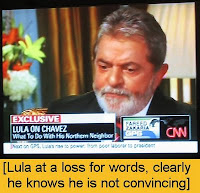 some point Lula must have realized that he did not convince Zakaria, and perhaps not even himself. This last picture on the right is a witness about some strange brief pauses taken by Lula then, with shifty, impatient looks, images that we do not get from Lula at any other point in the interview.

I am not going to detail why Lula is so wrong because not only the abuses of Chavez are public knowledge, but this blog is a whole narrative of those abuses and to top it off, the CIDH has just published last Friday a lengthy report where Chavez electoral abuses are detailed, a report by the way that Zakaria did not need to make his statement (3). I rather speculate on what is going on with Lula.

First, Lula comes from the hard left that got educated to reality with time. That is why he had to run three times before he was finally elected. As such he might never have managed to reconcile fully his lefty militant heart to what he knows is the reality that has brought him success and keeps him high in polls. He knows he has betrayed some of his youth tenets but he is not going back because he is smart enough to understand that this way is the one that does bring some success.

As such Lula has always looked at Chavez as the kind of leader he might have wanted to be if he had a smaller country to rule and more means. Federal Brazil does not have the easy riches of Venezuela. Brazil is such a world in itself that a Chavez like clown is simply not possible anymore there (Qadros might have been the last specimen of the sort and Brazilians might have learned their lesson for good then). It is simple quite possible that Lula lives vicariously through Chavez the leftist experience he will never live himself, blinded enough by Chavez charisma and showmanship to overlook the fascist and military tendencies of Chavez that someone like Lula should know better have having suffered for the lengthy Brazilian military regime (other leftists that suffered repression are not fooled by Chavez, for example Chile's Bachelet or Uruguay Vasquez).

But as I have already written in this blog Brazil is an Imperialist country by tradition and perhaps even by vocation (Bandeirantes anyone?). Lula might try to pretend it is not but he fools no one. However we cannot blame him much on him applying imperialism on Venezuela: after all Chavez is serving to him the country on a silver platter and why would not Brazil industrialists benefit from the Venezuelan piñata? If there is one that should be judged harshly by history, and hopefully by judges, on this matter it is Chavez, not Lula who after all behaves as the president of a great country, serving his country interests before he serves his own ones (well, in general at least).

Still, after this interview it should be extremely clear to anyone that Lula has helped Chavez as much as he could, that he has been an active accomplice in the destruction of Venezuelan democracy. In fact we could go as far as to say that Lula has only disdain for the Venezuelan people and that he thinks that Chavez is actually a redeemer that got a bum rap and thus deserved his help. As such when history books will be written Lula will be pointed as having some Venezuelan blood on his hand because at no point we can show a Lula berating Chavez for his abuses, even in private (read again that part where he thinks he has been achieving great things in Latin America!). In fact we can even think of occasions where some of his comments were perceived as indirect criticism of Chavez only to see Lula a few days later backpedal fast and embrace Chavez again. And let's not forget that Lula visited Chavez at least twice in important electoral times endorsing him.

The funny thing for me here is that Venezuela and Brazil are probably the two countries closer ethnically in Latin America, with a similar racial make up and mix, a similar way to conceive of life. And yet Venezuela is fast becoming a failed state while Brazil is threatening to become a world power. In a way a take over of Venezuela by Brazil would not be such a bad thing, you know.... I wonder how much of that subconscious thinking might have operated in Brazilian ruling class as they contributed to the demise of Venezuela (they will put the blame on Lula but too many went along this complacency toward Venezuela). Meanwhile woe is us in Venezuela because while Chavez squandered our possibly last historical opportunity Colombia and Brazil grew in strength. In a post Chavez Venezuela Bogota and Brasilia will fight over taking Venezuela under their area of influence.

Remember, ten years from now, you read it here first.

1) I get the CNN from London bureau, not the direct one from Atlanta, ask my Cable company why.... Fareed Zakaria GPS. Thanks to my new Direct TV decoder that allows me to record on command and examine such an interview in detail. I shall use it on Chavez in the future!

2) I do not have the transcript, what I quote is what I lifted from replaying the interview. Since Lula spoke in Portuguese, CNN gave us a simultaneous translation, with the risks that this implies on finer points.