Today Chavez named his first Gauleiter for the city of Caracas. In spite of an opposition victory last November, Chavez decided to change the law, to violate the constitution and named someone to preside over Caracas, in spite of the people clear will in choosing who should rule their city for the next 4 years. So he chose one of his most faithful, one that was already very willing to exert the Tascon list to its full effect when she was presiding the Caracas water works, and who applied speedy politicization tot he nationalized companies she was asked to direct after, as well in the cabinet positions she held. She is the perfect political bitch, bitter and vengeful, unyielding, uncompromising, devoted to Chavez, the perfect first appointment for the new age of gauleiter coming upon us in this increasingly fascist regime. I have chosen the following picture composition to illustrate clearly that she is not an amenable person, willing to discuss fairly Caracas future with its elected officials. She is the hard core militant. She will be in good historical company as Goebbels was Berlin's Gauleiter. 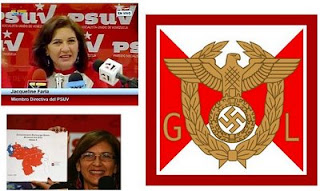 PS: I have been following her career more or less loosely, but enough to have her appear several times in my blog, such as these two instances. I always considered her dangerous, even when she was at the water works before the Tascon list, the perfect cold professional apparatchik. I am not surprised by this choice, even a good move for Chavez as a woman is expected to be less frontally attacked. But the opposition will do well to attack her frontally from the first day, boycott her and call immediately for a referendum to boot her out, along the Caracas representatives that voted for that violation. Otherwise they are doomed as more gauleiters will follow once the main one is set in place.