Two days ago I published a post explaining why Venezuela is today a dictatorship. Apparently some still do not see it, or make excuses for not seeing it.

Well, I would love very much to hear their opinion after yesterday's words from Chavez. And expressions such as "you know, some times he exaggerates" "you know, it is his style" "you know, he gets carried away but he will not do half of what he said" are not going to cut it.

In his return from a long trip, and on the anniversary of April 13 he said the following, again on a cadena without anyone having the right to reply directly to him, not even through state TV at the nightly news (keep that in mind, will you?)

"¡Debemos seguir a la ofensiva, arrollando a la contrarrevolución, no tenemos más alternativa!"
We must keep the offensive, crushing the counterrevolution, we have no other option [note, counterrevolution is the name for the politcal opposition, least you be fooled]

"Pero es imposible, ellos no respetan nada, no respetan a nadie (...) con la burguesía contrarrevolucionaria no hay entendimiento alguno, ¡no lo hay ni lo habrá!"
But [agreement] is impossible, they do not respect anything, they do not respect anyone (...) with the counterrevolutionary bourgeoisie there is no possible agreement, there is none and never will be! [apparently he is not happy that people like yours truly do not approve the 30 years sentence to people we consider innocent of the charged crimes, head that US PSF alwasy complaingi about death penalty and the like?]

"invito a los poderes del Estado a seguir en la ofensiva por la justicia (...) ahí están impune los medios de comunicación que participaron activamente en el golpe"
I ask the powers of the state to pursue the offensive for justice (...) there are unpunished the media who participated actively in the coup [that would include not only Globovision but also Venevision and Televen. Are we going to see once again Venevision gloat while Chavez closes the last critical media, Globovision? How low is Cisneros going to fall? Also, after 7 years, how come that Chavez demands media to be punished? Why the delay? Why the orders to what are supposedly independent powers? In Spanish and in this context the word "invito" does not mean suggest, it is an assertive request]

“Los medios que están tratando de de subvertir y desestabilizar al país. Han comenzado una agresión abierta y descarada contra la juez que tomó una decisión, absolutamente ajustada a derecho. La burguesía con sus medios arremete, espero que hagan lo que tengan que hacer las autoridades”.
The media that are trying to subvert and destabilize the country. They have started an open and shameless aggression against the judge that took a decision, absolutely according to procedure. The bourgeoisie with its media attacks, I hope that the authorities do what they have to do. [notice how Chavez decides what is a good judicial sentence and that a public servant cannot be criticized for its decisions].

“Caracas va a tener además del alcalde Jorge Rodríguez, un jefe de gobierno, como lo tenía antes”
Caracas will have in addition of mayor Jorge Rodriguez, a chief of government as it had before [what is important here is the fact that Chavez only recognizes chavista elected mayors and that the other Caracas inhabitants who voted for opposition mayors, for about half the population, will now be ruled by a political appointee, discarding the November 2008 results.]

And from Tal Cual we have confirmation of these words with some of their interpretation.

So, the question is really not whether we are in a dictatorship, the question is becoming "how far along the fascist road will we go?". You will convene with me that the fascist language is there already; this is not communism anymore, there is no economical rational left, only the sick sectarian emotional political cut.

Note: to make things clear, by me publishing the Weil Cartoon on Marjorie Calderon, the ruthless bitch that condemned the likely innocent police officers to the maximum sentence of 30 years, I risk as of today to be indicted of treason, whenever convenient for the regime. The evidence if in this blog, they only need to track me down once the necessary legislation, or even precedent, is in the books. Should we take a poll as to when the first Venezuelan English language blogger is beaten up, jailed, indicted, whatever? I will remind folks that already Oil Wars blog allowed publication of comments where readers wanted to come to Yaracuy to beat me up; that Ultimas Noticias already published advertisement to accuse folks participating in the Internet opposition. 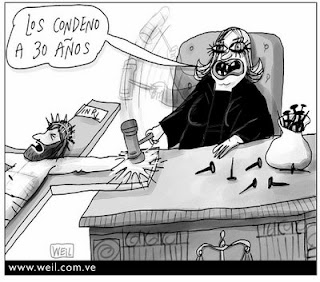