This blogger is supposed to be in semi retirement but the amount of idiocy that bubbles out of the chavista decay does not offer me any possible rest. 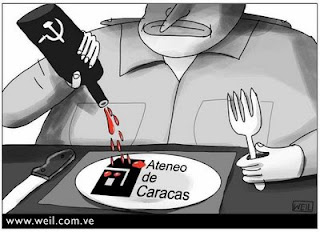 Today Tal Cual offers me two items which allow me to talk about the takeover of the Caracas Ateneo. The "Ateneo" (Atheneum) has been a long serving institution, privately managed with state subsidies. As such it has always been a haven for culture, in particular for the non academic kind or the not politically correct according to the parameters of the people in charge. 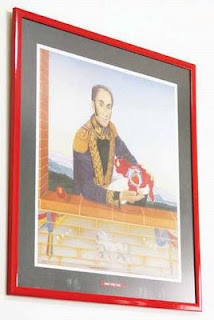 room for the Caracas Ateneo (the Valencia one for example has been taken over long ago). What is at stake now is the building itself, strategically located next to our biggest concert hall, the Teresa Carreño. The Ateneo has a library, a book store, auditoriums, ateliers, offices, space for a cultural radio station, etc... But the Ateneo has stopped receiving state subsidies for quite a while it seems. Now they want the building, allegedly to install inside an University of the Arts. I suppose to train people to paint horrors like the one on the left, also courtesy of Tal Cual today (observe that even the frame is shiny red). That picture was taken at some PSUV headquarters. The bad taste and sycophancy and idiocy speak for themselves, no?

There are of course an amazing numbers of things going wrong with that.

First the culture minister, Soto, who is a veterinarian by trade. Nothing wrong with that, but when you hear him you can be forgiven to believe that he still thinks he is speaking to some cattle. I mean, the guy was put there NOT to promote culture but to destroy the one in place, as meager as that one was to begin with. What can you expect from a guy on the record saying that Chavez decision to take back the Ateneo buildings was "wise"? When I hear him and see what he is doing I am reminded of Elena Ceausescu.

Second, if they need a university of the arts, why not build it? Is it not better to multiply such art scenes? Why destroy a semi functioning institution for one we know will not work out as the other educational enterprises of the regime have proven to be? If you doubt me, inquire as to whom is hiring the graduates from say, UBV. And of course, if it is to promote art such as the one above, well, you know.....

Third, what we see is a conception of culture that makes no sense. For example the Kultur minister stated that the Ateneo will now serve Kultur to the people with events that will not require purchase of tickets. Wonderful! Now the artists will depend more than ever from state funding for their survival! I let you imagine the quality of those shows!

I can keep going but you get the picture. I am just ending this with what is probably the real reason of the Ateneo take over: the expulsion of the opposition from down town Caracas. It is the same motivation that pushed chavismo to remove Ledezma authority from downtown Caracas: this one is to become a chavista territory only. Why?

Because Chavez is scared, because the Nazional Assembly is scared, because fanatics are scared and cannot stand to be confronted with dissent of any type. In addition, the Teresa Carreño is increasingly a mere political hall, Nazi style. Across the street the Hilton has been taken over and transformed into the Alba Caracas which is nothing more than a pension where all sorts of pro Chavez foreigners, mostly Cubans, are stocked away from inquiring eyes. The Ateneo was the last redoubt in the area as even the Bellas Artes museum complex had gone red. For chavismo the Ateneo had become an intolerable eye sore.