The LOE march in Caracas. And another represion!

Update 2: A picture from reader Pedro Be... No comments needed. I have loaded it full size, click on the picture wonder about the tear gas really used. 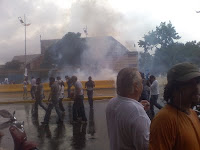 UPDATED: The march I mentioned below was repressed again by the most brutal means, now the routine of the glorious bolivarian revolution based on the love of the people. Bullshit! Pure fascism is what is happening in Venezuela more and more!

Globovision cannot be accessed right now. But you can go to El Universal where you can read the following (in Spanish): a chronic of the day titled "marching towards repression", includes a photo gallery; a declaration of Ledezma who states the obvious: the government resorts to repression because it lost the enthusiasm of its followers as the opposition march clearly outnumbered the rather pitiful chavista rally; a fascist speech from the Nazional Guard officer in charge of the repression; how the whole day was followed overseas, and certainly not in a favorable light for the government.

---------------------
So there is yet another protest march from the opposition in Caracas, and yet another success as chavismo simultaneous march, the one "approved" to reach the Nazional Assembly does not have the same volume of folks, even with all the buses used to ferry in folks. Chavismo has lost Caracas streets for so long now.......

Miguel is attending and sends the following picture, taken with his Iphone, from the Libertador avenue: 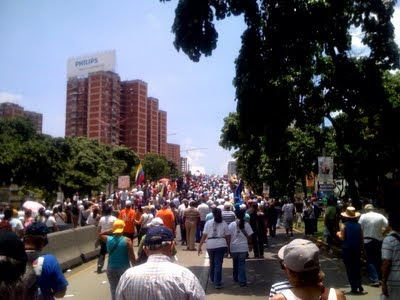 If anyone else wants to send their pictures I'll pick up a couple more to add after this one. By the way, Miguel will have more pictures but tonight, at his blog, after he comes back.