It seems that the latest grand tour of Chavez has been upsetting enough even for chavistas that Chavez felt compelled today to come up with some lame explanations. But may as he can justify, 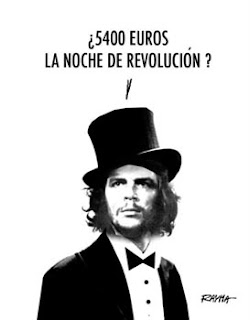 the cartoon of Rayma this Sunday is simply not going to go away. Let's recap first.

Chavez left Venezuela for two weeks, and came back only to find floods, earthquakes and a state totally inefficient to face the emergency, amen to the routine it cannot deal with, from rampant crime to crumbling health system. But what irritated most were two things: the Madrid luxurious stop and the purchase of all sorts of weapons in Russia, not only unnecessary today, but too costly for the current economic situation and ill fitting for a self appointed prince of peace. The contrast between Chavez words and his real life actions could not have been driven home more clearly than this tragic, and ridicule end of a journey.

Truly, this must have been the worst journey of Chavez. first , he only visited rogues. Then while he was away the successful No Mas Chavez took place. While at the same time the opposition mounted a huge protest for his recent policies. He tried to make a stopover in Venice "Mostra" but instead of glamor he collected ridicule as it was obvious that the adoring crowd were shallow gliterati and paid for entourage. In the end Stone proved himself to be and aggressive ignoramus and a budding fascist, not collecting a single award for his trouble.

Sensing that things were not going his way Chavez tried in a hurry to organize a stopover in Madrid where he had no urgent business to attend. The objective was of course to meet at least one presentable head of state and today the only European willing to be seen with Chavez is Zapatero, and barely at that, mostly because the Venezuelan debt to Spanish interests is large enough that Zapatero needs to grin as he swallows hard. In the real world it is called blackmail, something that Thuggo understands and practices very well.

We will never know what really pushed Chavez to plan that Madrid stopover but he must be truly sorry right now. I suppose that after having been pictured with so many barbarians (did you take a look at Qaddafi recent outfits?) Chavez needed to present a more "intellectual image of himself to the world. So, out of the blue, he decided to stop by one of the major bookstores of downtown Madrid, as a simple tourist and shopper. Apparently he spent almost one hour and left with about 60 books. We only learned that he inquired about the book he gave to Obama in Trinidad, as if he needed to read it again... I mean, what kind of publicity stunt was that? At the end, infuriated passerby suffering the disruption that Chavez large entourage brings everywhere started heckling him as he left the store.

And then we learned that he spent for his own suite 5,400 Euros, a suite he sullied for only a few hours. No word about what was spent for his excessive entourage. Hence the Rayma cartoon legend above "5,400 euros the night of revolution?". Priceless, and I mean it in the context...

But Rayma is not the only one whose creativity benefited from Chavez wasteful indulgences. The press this Sunday was littered with acidic comments and revulsion. This short sample from El Nacional (subscription):

Milagros Socorro commented indignant that Chavez could afford to buy 60 books in a fancy Madrid bookstore while in Venezuela books are not only exceedingly expensive but because of CADIVI shelves are increasingly depleted. Indeed, if we average at 20 euros the books bought by Chavez, we add up 1200 Euros, which is more than half what a normal Venezuelan is allowed to spend in a year if s/he wishes to travel. Once food and lodging are factored in, intellectuals like Ms. Socorro, or book worms like me, have very little left to spend on half a dozen paper backs at best.

Simon Alberto Consalvi wondered about Oliver Stone throwing stones at the people who actually made it possible for him to throw stones. He had this exquisite put down in Spanish about Stone:

"Stone exhibe la banalidad de los rebeldes sin causa". Stone shows the banality of the rebels without a cause. Sounds much better in Spanish.

Barrera Tyska observes that no other head of state ever attended a Venice Mostra because their are minding their shop. But this is only an excuse for him to demolish savagely the wasteful ego of Chavez.

And more but that is enough of a sample of how Chavez managed to tarnish further his image, something that some were calling impossible. All agree on one thing though: Chavez is really out of touch, out of timing, to do such a trip as things are getting worse by the day in Venezuela. No wonder Chavez had to explain himself today, justifying the expenses. Yes, he is the one who pays to be received by these truants he visited, when they should all be the one paying him for being the lone "elected" head of state to visit them.... Then again he is about to join them in this college of illegitimate heads of state.

Esta será la imagen que perdurará de Hugo Chávez, finalmente un pobre tipo a quien el poder no hizo sino poner una lupa en sus rasgos hasta mostrarlo en toda su mediocridad, avidez de dinero, lujos y privilegios; y, todavía peor, en su desprecio a la democracia, los derechos humanos, el respeto al otro.
This is the image that will follow Chavez, a nobody that power did nothing but magnify his traits until it exposed him in all his mediocrity, thirst for money, luxuries and privileges; and even worse, his disrespect for democracy, human rights, respect to the other.

To leave you in a truly somber mood, there is this picture of Chavez and the strong man of Iran, Khamenei, the one that singlehandedly conducted the electoral fraud to strengthen his terrorist theocracy. Chavez, so far, is the only "elected" leader to visit him. Commenting further would be an insult to our intelligence.