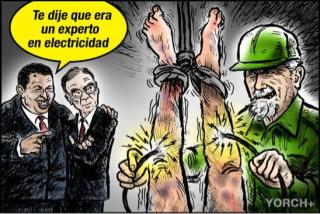 There is really no point in describing the day, full of Chavez usual self importance.  It included everything, from rewriting history to threats where needed, reminding us once again that the Venezuelan system has ceased long ago to be a democracy having become a not so cryptic military dictatorship.  An elected one maybe but a dictatorship nevertheless.  And of course miscellaneous repression here and there for those who do not think the day a glorious one for the pantheon of our history.

No, the day events are in fact of lesser importance than the announcement two days ago that Ramiro Valdes has been sent from Cuba to solve our electricity problem.

Where to start on that one?

By the notorious fact that Ramiro Valdes is one of the major assassins of an already assassin rich Fidel Castro entourage?  That he collected such a dubious honor by being one of Fidel Interior Minister, you know, the one in charge of repression and jails?

Should we discuss the utmost disdain by Chavez to Venezuelan electricity experts who told him years ago that the problem was coming and the ways to resolve it?  It seems that no Venezuelan will serve.  Even the Brazilians have been called but they only offered a non-committal response for the medium and long term, diplomatically making it clear that Chavez was in a mess of his own doing and that they would not take a risk to their reputation in pretending to bring an impossible quick fix.  All was said when the Marco Aurelio Garcia dryly remarked that the electrical system was "deteriorated". (1)

Should we stubbornly note that Cuba is a hell hole of electrical problems, a totally outdated economy, if we can still call it an economy, that Caracas alone consumes electricity quantities comparable to what Cuba as a whole consumes? For the life of me I cannot conceive how Cuba can help Venezuela except in telling Chavez how to be tough with the people as he forces rationing upon them.

No, the arrival or Ramiro Valdes is bad news.

It is bad news becasue his only electric expertise is in reselling third rate electric plants at overpriced value to Venezuela allowing Cuba to benefit from our crisis.  If anything these past 11 years we have learned that Castro-Cubans are as corrupt as Chavistas.

It is bad news because it shows how deep the government of Cuba and the one of Venezuela have become dependent on each other, to the point that Castro sends his colonial proconsul to Venezuela to help Chavez deal with a situation he cannot control.  Not ruling out that Chavez might be playing Valdes against Raul Castro, all is possible....

It is bad news because Ramiro Valdes has been sent really to coordinate better repression in Venezuela, from Twitter to student marches.  Valdes is a professional murderer and as the cartoon indicates above, he is hired by Chavez for that purpose, not to solve the electricity problem for which Chavez could find better experts elsewhere in Latin America.  The cartoon reads Chavez saying to Rodriguez, the current electricity minister, "I told you that he was an expert in electricity" (2).  There you have Ramiro, my opinion on you whenever you want to start censoring Internet, the proof you need of my subversive activities.

But the Ramiro appointment is not going unnoticed and it is fast creating a backlash, today including even a letter from former President Carlos Andres Perez who apparently is not as dead as some thought he was.  That letter is a masterpiece of straight talk: the essential is included, from Venezuela having become a Cuban colony to the dark future in wait for those who help along as he advises them to read the Rome statute, remembering that crimes against humanity never prescribe and that sooner or later from Luisa Estela Morales to the current degenerate Army Generals will find themselves in a tribunal, accounting for their help to Chavez and Castro.

------------------------------------------------
1) mentioning Brazil it is useful to note that Thomas Shannon, incoming US ambassador to Brazil stated today that Chavez should stop repressing his people.  The remarks were done in Portuguese, in Brazil, serving notice tot he enabling Lula administration that it was time it stopped pretending that everything was nice and dandy in Venezuela.  Will Lula chose to fight with he US over Venezuela or at least have the decency to stop propping up the unspeakable actions of Chavez?  I ain't holding my breath over Lula, settling for the time being I give another bonus point to the US State Department.