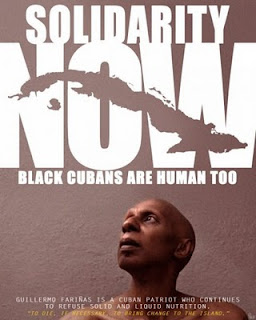 We have a XXI century socialism and we can say that it i nicely accompanied by a XXI century racism. Or how else can you explain that in Cuba we have political prisoners who starve themselves to death in defense of their Human Rights, and who are, GASP! African Americans, Blacks, Niggers, whatever you want to name them. BUT, they are the people that supposedly, allegedly, according to the Castro-chavismo propaganda were supposed to be the ones for which that XXI century crapism was lucubrated?

I found this poster at Babalu and I found it very appropriate to broach a subject over which I had not written much yet.  Not that Chavez leaves me with no time but because I did not know quite how to write about it.


But the fact of the matter as one African American already died (Orlando Zapata Tamayo) we have yet another one about to die.  And we have Lula making perhaps the biggest mistake of his political career endorsing the Cuban repression! A support that will cost him dearly when history books are written as the biggest enabler of tyrannical regimes in South America since the US withdrew from that role two decades ago.  Even the Brazilian Senate foreign committee had to go against the president of the country.  To illustrate how far at the margin of history Lula is we can cite the European Union Parliament condemnation of Cuba by 509 votes to a mere 30.

The Raul Castro charade is finally over.  With the European Union vote taken against the original wishes of Spain and for which even the Spanish socialists rejoined the main fray, it is clear that no one has any illusion on Cuba and that now we are in a mere death watch for the Castros.  Cuba is now officially a pariah state, and Venezuela is about to rejoin it any time soon.  Faithful readers of this blog knew that all along of course, but it is nice to see it so blatantly exposed as it has been in recent weeks, from every corner.

PS: researching this post I learned that actually Lula would see himself as the UN next Secretary.  That would explain a lot Brazil's recent postures in favor of Iran or Cuba.  There is indeed a majority of pariah to semi-pariah states at the UN and Lula expects that none of the 5 veto voices at the UN would dare to veto him.  We'll see, but right now we can be sure of one thing: Lula is unfit for the office.
Posted by Daniel at 5:29 PM