"CENSURADO", chavismo finally comes out of the closet of naked censorship 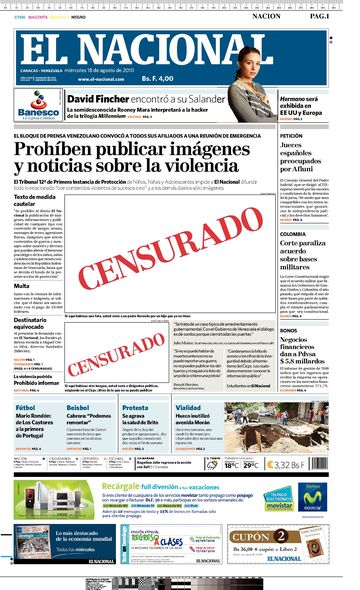 This image is the front page of El Nacional today.  "Inappropriate material" had to be removed, and thus El Nacional returns to the strategy during Perez Jimenez (and other dictatorships elsewhere) of leaving blank spaces where there were supposed to be news that were not "fit to print".

The censorship measure will apply to all papers and with more severity to El Nacional.  It will last at the very least for 4 weeks, those of the electoral campaign duration which underlines the purely political decision of the a judicial system receiving direct orders from the regime.  The implications of this deserve a longer post later but I thought it was important to announce that and to give you the only two links in English with some information available so far.  Do not worry, I am sure that plenty are on their way as in Spanish it is already a worldwide scandal.
The Walls Street Journal.
The AP
Posted by Daniel at 5:46 PM