Electrical lies of micomandantepresidente, the rationing that hides its name 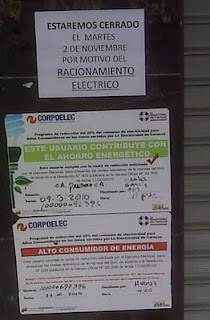 Your beloved intrepid blogger is back in town and to try to recover from the shock in Caracas after weeks of organized countries, low crime, delicious food, etc...  he tried to go to one of his two favorite pastry shops of Caracas.  You know, to soften the blow, the more so that Spanish cuisine is good but its pastries really suck, thus it would be a good transition.

So I arrived at Pandoro (home of the best Venezuelan made panettone, I will not take discussion on that) to buy pasta seca de almendra for tea time.  Kind of dry assorted biscuits with a touch of marzipan, very good there, excellent to dunk in coffee or tea.

It was closed!!  On a Tuesday.  Thinking it might be a yearly closing for vacation or something I looked at the posted signs and no, it was not a normal closing, it was a forced closing because of electric rationing.  Top bill "racionamiento electrico".  The two bottom bills are placards from the electric company when you are a good guy (in green) and when you become a bad guy (in red) so all know you are a bad guy and can be punished in whichever patriotic way your customers prefer.


Now, the problem here is that a couple of months ago the vice president Elias Jaua made a big production of visiting the Guri dam and said that thanks to micomandantepresidente rain maker and light of the world the water level had fully recovered, that water had to be thrown away now and that the electrical crisis was solved.  Or something to that effect.  And yet, with the Guri full, rationing is back in Caracas and shops must close on occasion, in particular a bakery shop because there is no way they can cut down on electrical consumption since their main item is the electric oven: it is on, or it is off because bread cooks always at the same temperature.

So there you have here, the incompetence of the government in delivering electricity and its now pathological lies, to which you add their attempt at make the final consumer as the bad guy.  The last one in my opinion being the worst offense.

When a regime has no qualms in punishing, pillorying a small artisan you know that something is really, really wrong.
Posted by Daniel at 9:40 PM