Maps are have power, and give it to those who know how to use them.  Thus we must welcome and mightily praise the initiative from Christian Font, Dorothy Kronick and Javier Rodriguez Rivas to design, for whatever reason pushed them, an electoral map of Venezuelan electoral results since 1998.

For sure, there are still plenty of bugs in that map such as pesky borders that do not match, or perhaps the wish to incorporate too many details rather than separate the type of maps altogether.  For example I would have preferred a plain national map for the country at states levels, and a set of 20 something individual maps for each state which could carry all the data.  But I suppose that for any cartographer the temptation of trying to encompass everything in a single map for visual effect is irresistible.  Unfortunately for Venezuela it is impossible to achieve because the population unbalance, and the political polarization make whatever electoral victory visually unsatisfying if it does carry at the very least a 30% of the rural districts.  Then again since I am one of the lone voices that specializes in the Venezuelan Poduncks voting patterns I might be biased in my comments because of my needs.

Thus we have now a new tool that is bound to get better with time and that will save people like me a tremendous amount of grief while building up excel sheets.  Although I have a few minor points of disagreement with the way data is calculated (wisely based on ESDATA among other things) the general patterns are clearly set and allow to anyone with minimal interests in Chavismo electoral history (besides fraud, vote buying and the like) to see how the electoral landscape of a country can evolve under populism.  As an example on how this can be used, and its limitations, I have picked up the electoral picture of Yaracuy, my home state, in 1998 and 2010. 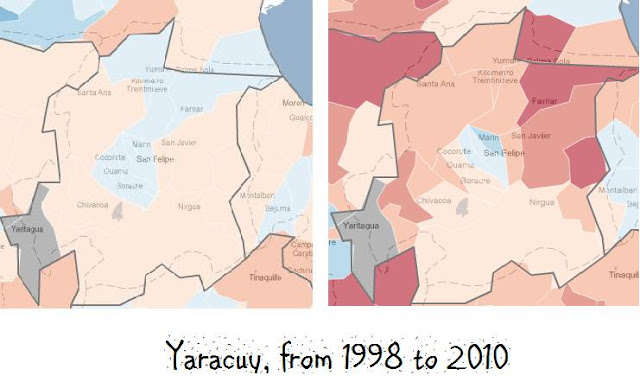 With this map we have the general frustration that I experience whenever I see such type of maps: WHY, O WHY?

Indeed, it is very difficult to convey the reasons why there are such electoral changes in a region over 12 tears even within an extended legend at the foot of a map.  And the more so when that map is national as I already pointed out above.  Well, maybe I should not be so tough because after all it still leaves me with something to do :)  But I suppose my irksomeness (word?) comes that I know that too many people will go no further than such maps and say " Whoah! look at how mighty Chavez is" when in fact he is in a serious popular decline since 2007.  And since I cannot force them to read my blog or similar material, well, that is the idea they stay with.

Coming back to Yaracuy.  San Felipe and Yaritagua (why the missing data on Yaritagua when I have seen it elsewhere?) are the only urban areas of Yaracuy.  San Felipe because it is the state capital and crosses the 200 K mark and Yaritgua because, well, it is becoming kind of a dormitory for much greater Barquisimeto rather than a genuine urban area.  But if San Felipe remained more or less anti chavista, deeply rural Farriar went Chavez through and through and stayed there (Nirgua should be redder than it shows because there inner chavista divisions might be misinterpreted as being opposition, but that is another story).

The thing is that in 1998 the Eastern parroquias and municipios (district and counties) of Yaracuy were sugar cane dependent and very assisted by the administration of Eduarod Lapi.  This was unacceptable for chavismo which made a strong effort to liquidate as many sugar plantation it could and revive the racial  hatred of an area.  This was done though a signficant penetration of Cuban advisers who could easily disappear in the extensive rural area that the San Felipe governor had no means to survey adequately.  In 2004 Lapi was finally ousted.  by 2006 all the main sugar farms had ceased to function, by 2008 replacement cutlrues had mostly failed and today, well, Farriar and its neighboring areas are deeply dependent of misiones and thus vote very, very red.  In 1998 I would easily go for a Sunday ride in the beautiful areas of Eastern and Northern Yaracuy.  Today it has been at least three years that I have not dared drive around there on a lonely week end.....

Thus a map can tell you the extent of chavismo's success in reaching certain political goals, but it cannot tell you the whole story.  Chavismo understands quite clearly that and if one were a total cynic one would blame the team for creating such a map that I am sure might end up being used for chavismo's propaganda sooner than later.  But I am not such cynic and I am glad that these guys did such a hard job to get the project started.  My congratulations to them and my offer to help them in any way I can.