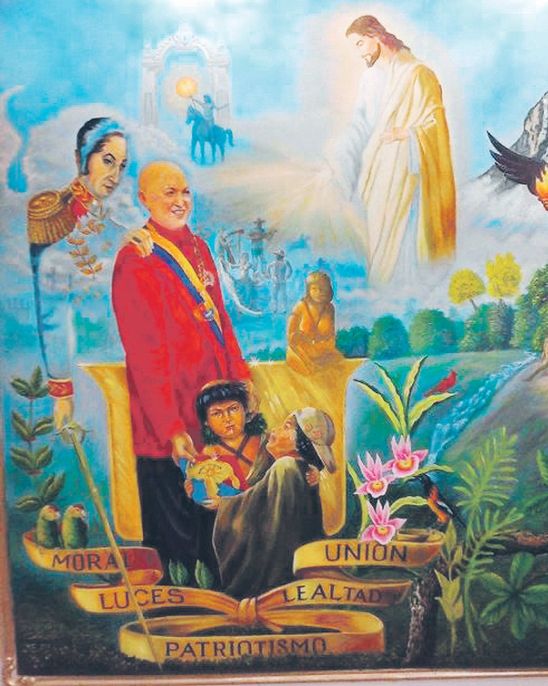 This one will have to be listed in the chapter of "truth is stranger than fiction".  Click for full effect.

Tal Cual regales us with this recent painting that has been hung in the Nazional Guard headquarters of the Andes region (San Cristobal).  Besides the obvious, that we do not know exactly whether Chavez is in heavens or paradise (same difference for many), we cannot help wonder if it is not a classical betrayal from the sub-conscious of the Nazional Guard in charge as to the coming demise of Chavez.  Still, for fun, let's do a little art criticism, or deconstructionism if you will, to try to understand whatever is going inside the strange neuronal connections of these people.

Let's start with Jesus.  After 13 years of "racial" bolibanana revolution", he is as Scandinavian as it gets.  I mean, he was an Israelite.  Look at Palestinians rioting today and find anyone reminding you of that Jesus.  Don't chavistas keep bragging about their ties with the Palestinian cause?

And let's keep on the race card.  Any African anywhere?  Or must we assume that the grotesque character with a poncho and a reversed baseball cap is the token African American in the composition?  Because the natives are represented at least twice, including the cherub like creature with a Yanomamian shaved head leaning against Chavez crotch.

Let's go back to the heavens now.  On the top left we have the allegory to Carabobo.  Of course, we are in a barrack and though the decades Carabobo has become a myth even though the Independence war did not finish at Carabobo.  This is the myth created by Gomez to justify his army that has gotten a life of its own....

There is also a little "llanero" choral floating.  Jesus was not updated but singing cherubs have.  I suppose there is some progress there.

Symbols abound: two aragüaneys in bloom, a forest that looks more New England than Venezuelan, two parrots, orchids, etc... including a cloud in the form of Western Venezuela,  the Guard locale.  And of course the sword of Bolivar that goes ABOVE the "Moral y Luces", underlining sub consciously that the will of the arms is stronger than the civilian symbols or morality and enlightenment.

Ad since I cannot avoid it let's finish with the said Bolivar, with a strange blue spin in his brain, who looks like a cross between ghost and fairy godmother which end up giving the look of a cheap fag in drag.

PS: let's not forget about a portrait of Bolivar as a terrorist displayed a few weeks ago in these pages.