The Grinch that keeps trying to steal Christmas 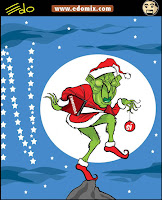 The more time passes, the more Chavez looks like the Grinch (even some would say in his green complexion).  Usually as the holidays approach Chavez tries some media stunt to make sure people do not forget about him, but this year he reached a new level.  It is not that what he did benefited him much, I think it will be counterproductive, but it is worth  reporting because it describes perfectly the advanced degree of mental decomposition that an obsessively narcissistic personality reaches over time.

First, he did a cadena.  You know, the forced SIMULTANEOUS MANDATORY BROADCASTING ON ALL TV and RADIO STATIONS of the country.  You may point out that he does cadenas all the time but the one he did on Xmas eve was, well, ridiculous.  He had all of his cabinet around a table, on a Saturday, before Xmas, when they should be taking care of familiy matters rathert than waste time listening to yet another of Chavez diatribes.  And if such public servants are supposed to serve even at Xmas, well, let them serve and do not hold them hostage to Chavez idiocy.

Of course, I did not watch it, of course, almost no one did watch it because everyone was preparing for our traditional Xmas eve feast, or running around like a beheaded chicken seeking a last minute due gift.  But Chavez did plow through his midday cadena, reprimanding his staff, or congratulating it, and making all sorts of promises and all sorts of lies as to having fulfilled previous promises.  I may not have watched but I was told and read the tweets of those who watched (because it is their job to watch Chavez for me).  I suppose that Chavez wanted to look like a piñata santa.....

If this was not already bad enough, the man had the chutzpah of sending an SMS to everyone in the country.  I find that particularly offending, that Chavez invades my SMS box who I let very few people access, to tell me in his usual tone some insincere bullshit that I can do without, a bullshit that had absolutely no redeeming Xmassy quality.  Not to mention that he must have paid for it, or did he force the three cel operators of Venezuela to relay that for free?  Chavez abuses really have no limit, not the slightest sense of decorum or timing.

But I suppose he wanted to be sure we would be reminded of him atrociously before he goes to Cuba to spend the holidays receiving some mystery medical treatment....

Thus is Chavez, completing his full transformation into a Grinch, not content in stealing from us our livelihood, homes, lands, etc...  but even our privacy and our Christmas spirit.

But keep going on Hugo,  and watch Putin.  He was high in polls and suddenly the Red Square filled up with protesters when he went one step too far.  The way you are going I am glad to observe that any time soon you are going to make that misstep.