Why they want to be president 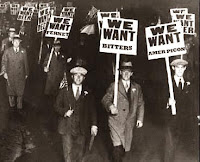 Not to bring a discordant note but with now more than month of primary campaign there are only three candidates that came out clearly as to why they want to be president.  Interestingly they are still the same three that were clear on that matter in October and still my three favorites: Maria Corina Machado, Diego Arria and Leopoldo Lopez.  You may disagree with their vision of the country and the future but you cannot deny them that they have at least a vision for something greater.

There are at least two other candidates that I would love to hear from them something as clear and concise as the three named above.  You know who you are.
Posted by Daniel at 7:10 PM