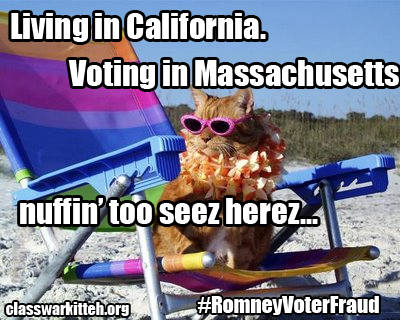 I am not an electoral prude but what happened in Venezuela last week is really worrying, almost beyond words.

By not being an electoral prude I mean that for political reasons some concessions can be made when someone decides to run for office in a district that it is not the one they live in. You may have been born there, you may live next door to it, your children go to school there, you may have a special connection there for X, Y or Z reason. Thus even if you are not registered there there may be a reason, a valid reason, for you to run there.


So when 6 candidates changed their registrations last week to vote in the state where they were sent by Chavez to run, I am not opposed on principle to that fact.

But I am dead set against the way that "change" was carried along.

In Venezuela there is a great stress made by the electoral board, CNE, that voter registration is serious, reliable, definitive. It is not but they pretend it is in order to obtain some pseudo credibility. So, one of the tricks they use to make us believe they are top notch is to set registration limit deadlines and stick to them.

Such intransigent schedule has helped  among other things, in blocking the registration of tens of thousand of Venezuelan overseas who were not able to register in embassies or consulates for the October 7 vote. First the embassies asked all sorts of illegal documents to allow for registration. Then the CNE delayed so much its response as to allowing Venezuelan to register with just their ID (per law), and the response was so subdued, that by the time folks could have traveled again to the nearest consulate the April 15 dead line had passed. To add insult to injury, the Miami consulate having been closed by Chavez because he felt like it, the people there were not offered a voting center and were forcibly "migrated" to New Orleans instead of the Washington embassy of easier and cheaper access than New Orleans. Amen of offering them a choice to switch to any voting center of their convenience.

We could only be surprised when suddenly it was discovered last week that 6 pro Chavez candidates AND their relatives AND their henchpeople were suddenly transferred to their "new" states even though the electoral registry had been closed for the December 16 election. So far we are talking a hundred or so in addition to the 6 candidates. I could have understood the CNE trying to make a case for an exceptional transfer of the 6 candidates alone, but it still would have been illegal and even immoral, well beyond any ethical parameter. For the other 100+, there is no excuse whatsoever.

Such an episode has consequences, no matter how hard and how lousily the CNE is trying to cover up its law break.

First, the electoral umpire of Venezuela cannot do such shenanigans when it is already highly questioned for its clear partiality toward Chavez.

Second, the CNE member at the center of the storm is already someone that has been put on the spot in 2010 for the infamous gerrymandering that cost the opposition as much as 6 seats. Socorro Hernandez reputation has never recovered since 2010 and now she may as well resign as she selfexposed as the real election minister of Chavez. Not that she will ever do that of course, she is one of those hard-edged resentful creeps that are only too willing to help Chavez consolidate his dictatorship through any means. It is with people like her that concentration camps offices were staffed.

Third, the contempt of chavistadom for Venezuela and even its own followers is out of proportion. It is not really that the CNE does help out people to relocate breaking the law, it is the ease and contempt with which this occurs. We can start with Chavez deciding who is running where, with no primary,  with no consideration to local leadership, with nothing but his own will and his desperate desire to put colorless to mean SOB at the helm of given states. The only requirement being that they are like lap dogs to Chavez. Somebody in Miraflores palace complained that they had to vote in Caracas while campaigning in Podunk and ipso facto it was read by the CNE as an order to transfer to whichever electoral center fit them better, family and hired help included.

The CNE was in such a rush to proceed, so infatuated with itself, that it was certain that no one would notice or protest, that folks would forget about Miami, that they forgot about the illegal transfers made inside Venezuela, that they forgot about the inconvenience to register if you were in an opposition district, etc, etc...  In other words, and it needs to be repeated, the CNE exposed itself as it never did, at least in the opinion of this blogger. Arrogance and incompetence go hand in hand because the sad truth is that in the end what the CNE achieved is to make sure that everyone in the 6 states in question knows without a doubt that the candidate sent by Chavez are doing a chore and not operating through a new found love for the people of a given state.

But nowhere is contempt for the voter more illustrated than in the case of Erika Farias exposed as crudely as one could wish for. The woman was elected for Cojedes in 2010 legislative election. Then she was already an outsider of sorts to the state and so they put her in the "list vote" ensuring that she would be elected (whichever gets the more votes state wide gets 2 out of three list votes, so even if you come second your top of the list candidate gets in). Of course she was elected, and soon after Chavez brought her back to his entourage. Fair enough you may say, but it does not stop there. Even though the woman was elected for Cojedes state, she could not be bothered to have a voter registration there at least for the 5 years of her tenure. You know, out of respect for those who honored her with their vote. I could have understood that she may have sent a letter to her constituents explaining that for X reason she was switching to Podunk, only to change her mind a week ago. But not, not even that elemental courtesy. Now Chavez sends her back to Cojedes and we find out that she is still not registered in Cojedes. Are Cojedes electors going to vote for a woman that has established so clearly her contempt for them? I am afraid they will as she will just need more cash and kitchen appliances to buy votes than other candidates.

The question now is how far is the opposition going to push on that golden issue? It is a unique opportunity to confront the CNE while at the same time making votes.