There is a lot of talk about food shortage in Venezuela. Well, in San Felipe we live it, there is no talk. Since the beginning of the year whenever I drive around town I see one episode of a long line, at least two blocks long, for a store or a van who allows people to buy, say, only 2 kilos of corn flour for arepas. I have meant to take pictures but since I am driving...

But this Saturday I got my chance. I went to the ATM for some cash and I saw a huge line to enter MAKRO. That store is a member's store, like Cotsco in the US if memory serves me well. In short, either you have a membership card or you ask for a day permit. The line was for the day permit requests. Although I needed nothing, as a member I went in to check out on all the fuss.


There had been 4 arrivals and people from all around town took the bus or cabs to enter MAKRO (the parking was almost half empty, it was "el pueblo" who was standing in line to get a day permit). Inside there were lines everywhere, as people's carts snaked to the distribution points and cashiers. It was amazing to see the lines going through almost all the aisles of the store....

One arrival was frozen big slabs of meat, distributed by the Nazional Guard, INSIDE MAKRO. I am sure that it was MAKRO that requested such "service" because there have been "meat riots".... I did not dare to take pictures, because Nazional Guards are dense and I do not want them to manhandle my Blackberry, but I can assure you that it was quite a sight to see the three guards dosing carefully the 5-8 pounds of frozen irregular cuts of beef. Who knows where it comes from, because in Venezuela I never saw beef sold that way.

However I did take pictures of folks. The one above shows you three of the arrivals. Besides meat, there was also margarine Mavesa manufactured from Polar. Since it is a wholesale store, people had to buy it by the case. One case billed per customer so when you see more than one case you can be sure that more than one family member came so as to be billed separately.

Sugar also came and it was 2 kilos per customer.  And toilet paper by the large package, a particularly scarce commodity since the regime decided to control its price (I use a Venezuelan style bidet, vertical jet, so I am not affected by the rather poor quality of toilet paper available now, if you forgive me a rather scatological detail that you will never see printed in news fit to print; bidet-owning-Venezuelans are privileged these days).

As you will gather from these pictures if you enlarge them, there was almost never anything but these 4 items in the carts. I mean, MAKRO sells plenty of other stuff, but the people came for that. I have to admit that I was very surprised at that. I mean, if you have to trek all the way to MAKRO and endure such lines, surely you would do some extra shopping. But no. People seem set in the type of shops they sponsor and visibly were there only for their missing brands or necessities. They would not dare to think out of the sandbox. No wonder chavismo is so resilient in spite of all of its faults.....

I cannot fail to be led into making a social comment about the poor dietary habits of Venezuelans, grown worse under Chavez. Most people you see are rather, shall we say, plump, and it is based on margarine, not even butter as for some reason Venezuelans seems to prefer solidified oil to the real thing. Let's not delve on sugar consumption, a must in Venezuela where coffee is served syrupy as a matter of fact, a problem for me who drinks it straight or with milk. 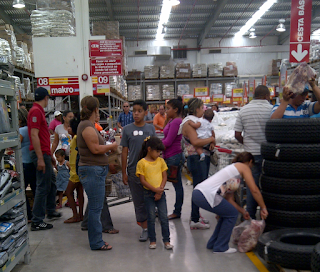 In the last photo there is an additional social comment. First, indeed some folks did buy something else at MAKRO, like the woman on the left carrying cheap booze...  But also you will see that people had to make two lines if they bought meat.  On the right there are two people struggling to carry they big chunk of frozen meat. They carry it because someone was holding the spot at the cashier's gigantic line while they were doing their own line to get served by the Nazional Guards. As you can see, we are getting already used enough to scarcity and lines that now those who can do not come alone so we can manage, to give it a positive term, the time of our lives we spend in line waiting for stuff that is plentiful in other countries, even those who have food subsidized programs for the poor. These people here are not real poor: they can afford large amount purchases, more than the day to day survival the poor must endure, even with Mercal. And most are, well, plump, not suffering from lack of food, even if they suffer from lack of quality. But that is another story,