Back to court: multiple jeopardy for Leopoldo Lopez

Leopoldo Lopez was back in court this morning, to be accused for the nth time for the same offense that holds no ground, no matter which legal angle the regime uses. I have covered Leopoldo Lopez legal problems long enough, often enough,deep enough to have to restart it all over again. That Lopez even won at the ICHR is not impediment for the regime to try once again to try Lopez for a minor offense occurred in 1998 when the regime has dwarfed during its tenure any offense that happened before February 2 1999. Offenses which files by the way keep gathering dust like the ones of Diosdado Cabello.

That they want Lopez  to be tried again should not surprise anyone: this is the country where double jeopardy is applied to individuals (Capriles) and media (Globovision), and where we see even cases of triple jeopardy (Pilieri). In neo-totalitarian systems what matters is not a final judicial decision; what matters is a never ending judicial character assassination which allows for all sorts of propaganda posturing and a scare tactics for others that would dare to follow in the steps and speak up.


The real question here is why Lopez again. Technically Lopez is not in his brightest hour. His lone representative at the National Assembly easily switched side when the regime unearthed some dirt on him. He could not run for the primaries in the end because there were too many questions as to whether the regime would recognize a putative victory. He endorsed Capriles and this one lost, dragging Lopez down as one of the culprits of the defeat when in fact Lopez may have been one of the lone success story of the 2012 campaign. His party, Voluntad Popular, founded in 2009 seems to have stalled some although it still is the one moment that attracts the youngermost dynamic crowd. In short, Lopez is not well placed to become the MUD candidate when Chavez demise is officially announced.  In front of him in the line there is still Capriles and now Falcon, Aveledo, Ledezma...(though court dates are possible for three of them any time soon).

But there are two powerful reasons for the regime, not only Chavez, to keep harassing Lopez.

The first reason is that Lopez "indictment" is related to his activities with Primero Justicia when this one was an incipient NGO in 1998. The regime is desperately trying to tie Primero Justicia to the pre Chavez era when in fact any activity of PJ as NGO is post Chavez coup, as a reaction to the decomposing society then. Right now the regime is embarked on a crusade to destroy PJ and everything is good enough for them, even though Lopez has left PJ over half a decade ago. 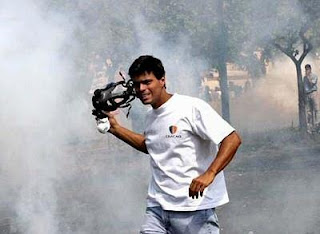 The second reason are more emotional as Lopez represents all what chavismo is not. Lopez is energetic, fit, handsome, articulate, willful, family man, outwardly generous, always smiling, courageous. Chavismo is repetitive, fattened on 18 old Scotch, mean, solitary and distant, vulgar and uneducated, cowardly hiding behind Chavez, and what not. We should not forget the famous picture of Lopez running away from tear gas which chavismo has interpreted as an act of violence, as if with a tear gas mask it was enough to stop the repressive goons sent by Chavez to repress opposition protests. Chavismo uses that over and over again.

In short, the new attack against Lopez by the regime is once again the proof that this one has run out of ideas, that it does not even recycle well old grudges like Chavez was able to do. Well, Chavez did not recycle well but at least he made them credible for his personal lumpen. But such a cornered, corrupt regime is at its most dangerous when it feels it is reaching the end point.....
Posted by Daniel at 7:10 PM