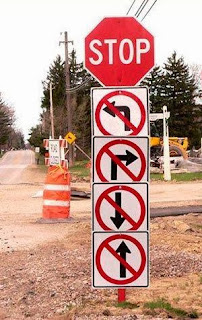 
Whatever the real numbers are on the economy what we know for certain is that the inflation is killing us while the country infrastructure, without upkeep for a couple of decades is crumbling at a faster speed, from gaping sinkholes in Caracas streets to constant power outages. For those of us still trying to have our business produce something, anything, the fight is harder by the day. Between the increasing difficulty to obtain less and less dollars to purchase our raw materials we are subjected to a relentless assault of bureaucrats acting as free agents to skim whatever they can from us, legally or not, it really makes no difference at this point. For many manufacturing business these days, trapped between abusive price controls, impossibility to manage labor force, scarcity of raw materials, logistical nightmares, it is increasingly coming down to meet payroll or pay our providers. Since by law we must do both then private debt increases or payroll is cut down, generating more social stress.

All of these is felt by the population which is realizing that the regime is simply unable to take any major decision. The regime is trapped into the prospect of radicalizing its system and accept state bankruptcy and the consequent repression that will be needed to control the masses; or the regime can start applying a dose of reality to state management, implicitly admitting that the bolivarian fraudulent revolution is over. The question thus, the real question, is why soon one year after the departure of Chavez the regime is unable to make up its mind.

I am offering one explanation here, of the many possible: chavismo is on the verge of fracturing itself. In Venezuelan history the break up of political parties is a recurrent theme. AD did it several times. Copei did it only once but it cost it its future. Even parties that did not make it to office managed to divide themsleves, such as Causa R, and even Primero Justicia when Lopez left. There is no accident that Venezuelan ballots offer dozens of political parties.

Specific chavismo, the PSUV, cannot escape that fate, the more so that it was founded as a support for Chavez, never along a strong ideological program, or at least a country objective. If the ambitions of Maduro and Cabello have been apparent and determined the inner struggles of 2012 and the first half of 2013, we cannot fail to note that chavismo itself was never able to unify the Venezuelan left, as many parties claiming that image still exist within chavismo (like the Communist party and other assorted small groups). Amen of the left that never joined chavismo or abandoned 2007, or even earlier.

I think that one reason why the regime is unable to take real political and economic measures is that any it may take will alienate one of the branches of chavismo and cause a break up. Since all inside know that a break up is a sure way to be booted out of office, they stick together at all costs, in particular the even higher cost of paralysis which is a slower way to be dismissed from office but the surest one.