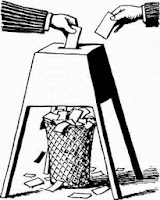 There are many ways to conduct an electoral poll. In general you ask folks for whom they plan to vote and apply the acknowledged corrections to predict who is going to win. This works more or less but it tends to at least predict the winner, the margins of victory being the major problem. Or you can ask voters who did they vote for. After the fact and totally useless for us, but good for a pollsters as a way to control their polling methods when the vote is still fresh in mind.

This is what Keller did, who used to be my favorite pollster before I decided to send all of the them to the dumpsters. At least Keller still has the saving grace that on long term trends he is one of the best, only lacking when he wants to apply them to tomorrow's result. But that is another story.


What Keller did was to ask who they voted for after last April when results allegedly were 51% Maduro 49% Capriles and which Capriles does not recognize. In May folks answered 40% Maduro and 45% Capriles. Keller folks, surprised, thought they made a mistake in the methodology for that question and asked again in August. They got 40% Maduro for 46% for Capriles..... I suppose that in the post April confusion they added "who do you think won?" getting 45% Maduro and 48% Capriles. And further more 54% think there was electoral fraud somewhere.

I truly do not know what we should really do with this, since it was from a Keller interview I read and I do not know the methods used, nor what were his results, say, in post October 2012 or post December 2007. I do not think really that within a month people got fed up enough with Maduro that they already refused to accept their part in voting him in. This is proven by the almost exact same result of August, 3 months later. Let's just say for the time being that it is one more evidence as to Maduro having stolen the election.

The real mystery here is how come the opposition does not make good use of such results which probably do not come only from Keller.
Posted by Daniel at 7:46 PM