It is kind of a little bit petty to write on a tacky election in Venezuela the day the world mourns Nelson Mandela, a man who for all his possible faults is universally admired, and deservedly so.

This being said the death of Mandela is a good opportunity to take a shot at the shadow of Chavez that is not growing at all. We can expect magnificent funerals for Mandela and compare with those of Chavez where only thugs and hangers on came.  Indeed Chavez was not worthy of admiration except, perhaps, for the trickery and wiles  he showed to get away with his many crimes.  As someone said on Twitter today, if Chavez were alive and Mandela a Venezuelan he would have probably been jailed. Which does not stop this most hypocrite of regimes to call for three days of national mourning for Mandela. The hypocrisy, for those who do not get, it is that Mandela ended apartheid n South Africa while chavismo created a new form of apartheid which started in 2003 with the Tascon List. Caveat emptor.

This being said I am writing this entry with little optimism. The info I have is rather negative though I have a hard time in believing it is that bad.  Then again I have consistently underestimated the willingness of the Venezuelan electorate to vote for the worst one, the most corrupt one, the one that will give them freebies even if they are taken form other people hard earned rewards of their work. It thus seems that the campaign of chavismo of ruining the commercial sector of the economy is getting some echo, that forcing public scorn on honest people is a valid campaign strategy. So, what else is new?

Of course blaming the indolent opposition voter is not enough. Let's never forget that this is a dictatorship that is not afraid to play the dirtiest of tricks to avoid losing power and go to jail.  For example last night the whole world on cable TV was talking of Mandela, but in Venezuela VTV was passing all the closing speeches of chavistas candidates live while ViVe and ANTV were passing interviews and speeches of chavistas candidates or representatives. From the state TV you would not know that the opposition also had an electoral campaign, you would only gather that it was a monster that needed to be destroyed.  As for Globovision, they talk of nothing, not even Mandela besides the obligatory flash news.

In short this campaign has been the most unfair one since Chavez reached office in February 1999, and an unfairness which was severely tainted of mean this time around. Monitoreo Ciudadano informs us that Maduro stars as the main culprit having forcibly occupied ALL airwaves for an average of 49 minutes a day. That is right, through the forced simultaneous broadcast on all of TV and radio (cadena) Maduro has his message forced through our TV sets for 49 minutes a day since November 16. This in addition to all the paid advertisement (abundant on cable TV, even on "foreign channels" that are watched here), the campaign blips that pass as "news" on state TV, etc.  The opposition gets a mere few minutes on the late news of private networks.

And let's not get on the ever recurring militant attacks, violence, press censorship, and even bit.ly domain blocks.

The perverse effect of all of this is the unaccountable suicidal paralysis of a sector of the opposition voter, coupled to an effective scare of the chavista voter who faced with the apparent silence of the opposition would be justified in thinking that it needs to vote for chavismo regardless of feelings held on the matter.

Pollsters are clear: there has not been enough time to judge how effective was for chavismo the artificial and marginal lowering of inflation. Chavismo was led by 5 to 10 points and now we do not know if it is still led, if any advantage it gained is already fraying. After all, LED 30+inches TV may have left the shelves but milk has not replaced them. Watching a movie on your new TV late at night may or may not compensate for your wish of a warm glass of milk.

Still, I may be wrong in wanting to throw the towel. After all the opposition has made a vigorous campaign and considering the means that chavismo has to fix its rallies a pauper opposition has managed quite a few local surprises. Going for the opposition also is that not only it is running 337 mayoral candidates and around 2,5k council candidates. That is a lot of campaigns, a lot of friends and relatives and interested supporters willing to monitor polling stations and lower likelihood of electoral fraud. Also the regime shows clear signs of nervousness. You need to remember that they are the only ones that can afford, at tax payer expense, all the polling they need. Thus new nincompoopy measures keep coming up such as yet a tenth consecutive year where firing is forbidden. The regime does not seem to realize that the new labor law voted last year was supposed to ban for all practical matters firing of personnel. Is the regime acknowledging that the new law failed? More than at any time the regime has made a campaign dedicated at convincing its past supporters to vote and that only proves that it is running scared and that it is taking nothing for granted. 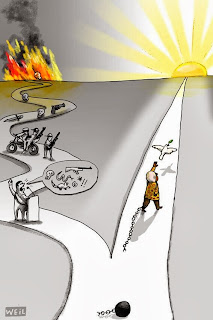 Whatever the results are next Sunday for once I am not particularly concerned. Just as the over spending of 2012 to reelect a corpse has brought upon the country the economic crisis that already caused the tie between the regime and its opposition in April, the new economic mistakes made to preserve that tie, even if they work, will bring us next year a deepening of the crisis. No matter what happens next Sunday the best the regime can hope is a breather of no more than a quarter or two. After all it is quite possible that the only way that we can start healing the idiotic willingness of a mass of people to accept absolute dependency on a political group is for them to suffer materially from that dependency.  Should we root for a Maduro victory so as to make his fall even harsher?  I am not such cynic but sometimes it is hard not to be one.  Fortunately political memories such as Mandela keep me believing that all is not lost.

Weil's homage to Mandela is just that, the road of Mandela and the road of populist firebrands like the one taken by Chavez.