Since in the second entry of this series I dealt with Primero Justicia, arguably the main voting group inside the opposition, I should go to the one that has become yesterday the second biggest force inside the opposition umbrella organization, MUD.  As the CNE slowly releases its last results, hoping that people will not notice that the victory claimed by Maduro is not so, we learn that the opposition has increased its share of mayors to 68 (+3 MAS dissidents, thus for a total so far of 71). The quantity may still seem low but that quality is quite something else. But that is for another entry.

Today in a press communique Voluntad Popular, the party led by Leopoldo Lopez, has announced that 18 new mayors are issued from its ranks. That is, 18 out of 71 which gives 25%. Not bad for a brand new party that had 0% last Saturday. Even Hinterlaces, the now chavista pollster called them "batacazo", surprise winner. And four of these town halls are big prizes. Well, not the biggest prizes but certainly fair ones.

The biggest prize is San Cristobal, State of Tachira's capital, where Ceballos has won with a stunning 68%. True, we should not forget that this victory is an opposition victory and it just happened that a VP was the primary winner, but it is also true that each party privileged its primary winners for the local campaign which is to be expected just as PJ backed up Ocariz in Sucre, its top prize. Thus the VP "counsel" was a factor in that victory.

If El Hatillo is a symbolic prize for VP, already discussed in the previous post, the victory in Maturin is a sweet one as it was not a given.  But there Warner Jimenez was helped by a chavismo division which gave him the capital of this most chavista of states.

The fourth big prize also came late in the night with Valera, the commercial center of another heavy chavista state, Trujillo.  And with Valera and San Cristobal come 8 other small districts in the Andean area, making VP able to speak head on to former area powerhouses AD and COPEI.   All in all VP already circulated today a rather pretentious map, but we can forgive them the enthusiasm. The point is that VP is today arguably the political party that is the most wide spread across Venezuela with the possible exception of AD which has not been gloating much that I know of. Then again let's not forget that in these very changing times many a politico is VP today, AD tomorrow and PSUV the day after... 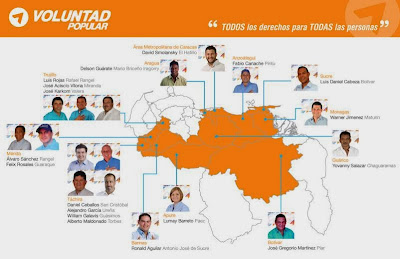 Still, it remains that Leopoldo Lopez has won his gamble, to create a national party. Now, let's see where does this lead him and the bright people he has been nurturing, because let's not forget it: for all his exhausting personal effort VP could not reach this position on Lopez alone.
Posted by Daniel at 4:18 AM