A new landmark date for repression in Venezuela: confirming the dictatorship

UPDATED 2
I was on my way back to San Felipe today so I could not follow events live (nor could I have attended the protests today for a variety of reasons). But in the end it did not matter much because censorship was heavy and tonight I can catch up through the net, Cable TV and Twitter, our only information these days. 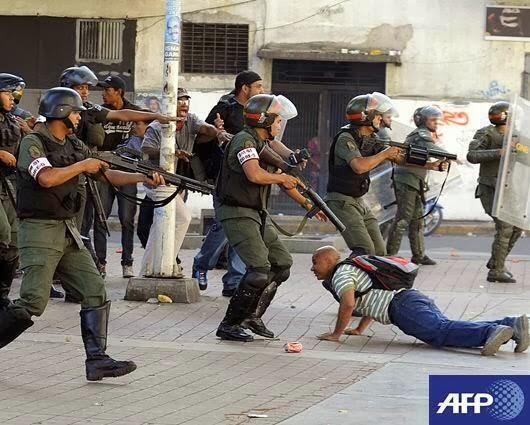 The only thing I could see was at "Paramacay" my lunch stop on my way to Valencia where they had Globovision on. Maria Corina Machado was speaking at the rally and it was well attended (something confirmed by the pictures I saw tonight). Interestingly Globo was not showing anything this morning when I left home so that they decided to briefly show MCM was telling, they could not hide the success of the convocation. Also Paramacay had not on VTV, the state TV propaganda. Usually they show nothing or sports but to show Globo shows that, well, you know....


So it was with little concern that I arrived in San Felipe at 5 PM and after emptying the car I had my tea time. That is until a neighbor showed up to ask me if I knew anything about Caracas. So I went to my Playbook and turn on TV.  The summary next.

The regime forced cable operators, at least Direct TV that I receive, to drop NTN24 from Colombia which had a live stream (their web page is also blocked with my provider) .  Of course Maduro was on cadena inaugurating a grotesque new monument on top of a hill that I saw on my way through La Victoria. I also saw a gazillion cops and Nazional guards all the way from Caracas to La Victoria... apparently not all officials summoned to attend could go by helicopter so the highway should be made safe for them, just in case their car broke down and they got Speared.

What was more surprising is that CNN in Español showed 25, TWENTY FIVE minutes straight of Maduro cadena before they eventually got tired. I was flabbergasted, the more so that CÑN did not give the equivalent time to opposition leadership. Were they afraid to be taken off the grid too?  It would be nice to know why Patricia Janiot went along. Still, CÑN showed that way, way less people attended the Maduro shindig than the opposition nice rally in Caracas and significant activities in many cities of the country (and Capriles more and more idiotically tweeting at sensing the situation escaping his slighter and slighter influence)

Eventually I started to get the body count. I looks like the regime used storm troopers to kill 3 protesters although 1 may be a chavista. Dozens of people injured? Things are obscure because the cadena kept going on in La Victoria with a night military parade.  I will have to wait more for more hardcore news, but I am leaving you with some interesting stuff. The first one is a video when someone actually gets shot. You need to pay close attention and maybe look at it twice.  But you will be sensible to the extensive shots, totally overdone if coming from security forces as students/protesters where running away.


Next one is from La Patilla which claims that the weaponry used against students is military grade.

And there is a gallery of pictures from El Pais of Spain.

Today we saw all the hallmarks of repression from a dictatorship:
- media censorship and closing of whoever had to be closed
- ignorance of the reality as the regime pretends all is fine though an official function (Titanic like orchestra?)
- brutal and disproportionate repression by police and army
- arrests by the dozen
- crimes through pro regime storm troopers
- pictures of assassinated people popping up on twitter

We are in a dictatorship. Time to get used to it and act accordingly.

Maduro has decided that there is a coup going on so there is an arrest order against Carratu Molina, former CAP aide de camp, and Gerbasi, former ambassador. Just as if these two old gentlemen where in any shape or position or strength to organize a coup. Nerves....

Also, let's think a little bit at how partial security forces have become in Venezuela.....

Another video worth watching


And better, it looks like one of the "protesters" displayed by foreign news, in particular El Pais as linked above, may have been an infiltrated chavista agent trying to stir trouble and provoke violence. La Patilla deconstructs the creep!
Posted by Daniel at 3:40 AM