The deed is done: with Lopez in regime's hands, it is worse for them

Troubled morning in Caracas (and Venezuela for that matter). The regime finally got its hands on Leopoldo Lopez about 1 hour before I type this lines. But I guess that soon it will wish it had not done so. Then again, with the psychopath faced folks that run the show like Cabello, it is to be doubted they understand their error, probably sickly celebrating in some quarters while, I am sure, a large chunk of chavismo itself is watching in horror at the monster they have created. Because yes, I have the feel that Cabello is behind that arrest as Lopez is all that he is not nor can he ever be. He may have forced Maduro's hand on that opus to weaken Maduro but in the end he will be swept away in infamy all the same. 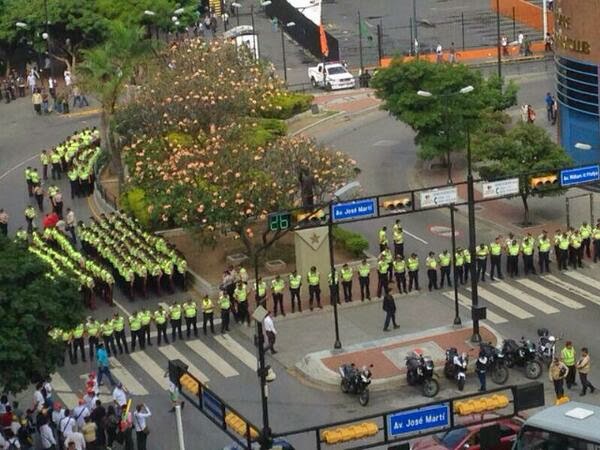 Briefly the events. The regime made an extraordinary deployment of police and troops around the gathering point of the march called by the opposition. NOTE: I say the opposition as a whole because the cause is now well beyond Voluntad Popular or AD or Capriles, or... The objective was to block access, in the silly idea that people would simply turn back and go home or work. It did not work out. The regime even had closed nearby subway stations. People came anyway and the result is in the two pictures around, one of the police circle, and one of the people filling up, all in white, the Francisco de Miranda avenue. Note: there are gazzillions of pictures on the Tweet, better than those I picked earlier this morning. But the ones I pick will do.

Then I had to go to work and dropped off the grid for an hour. I am in San Felipe, had I been in Caracas I would have been in white in the crowd. Good thing that they did not need me there. 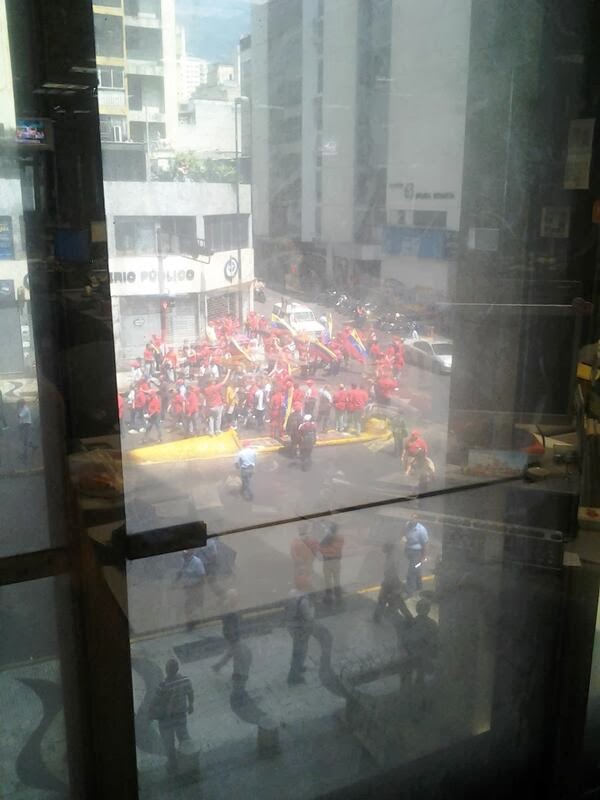 When I could get on line again it was to see that the march had not started but that the march called by chavismo to void the streets of downtown Caracas for the opposition was going in full though with nobody in when compared to the opposition gathering. The red shirted storm troopers did make it to the original goal of Lopez but in, well, pitiful number. Someone scared did get the guts to take the picture below, from his or her hiding place.

But event were unfolding at Chacaito where the march was blocked. Leopoldo Lopez decided to surrender himself anyway there. After all, it was quite clear that such a show of force by the regime meant that in fact they were afraid that they could not control their storm troopers elsewhere, in wait at ambush points, you can be sure. So he did the sensible thing: he climbed on the statue of Jose Marti and made his farewell speech (and tweet a few minutes earlier).
Then he went to a Nazional guard vehicle and left us this picture for posterity.

I also add a few relevant pictures that just became available as I am typing this entry. The first one is his good bye to his wife, with his emotion raw, painful to watch.  The second one when a truly pained Maria Corina Machado reaches to touch him. 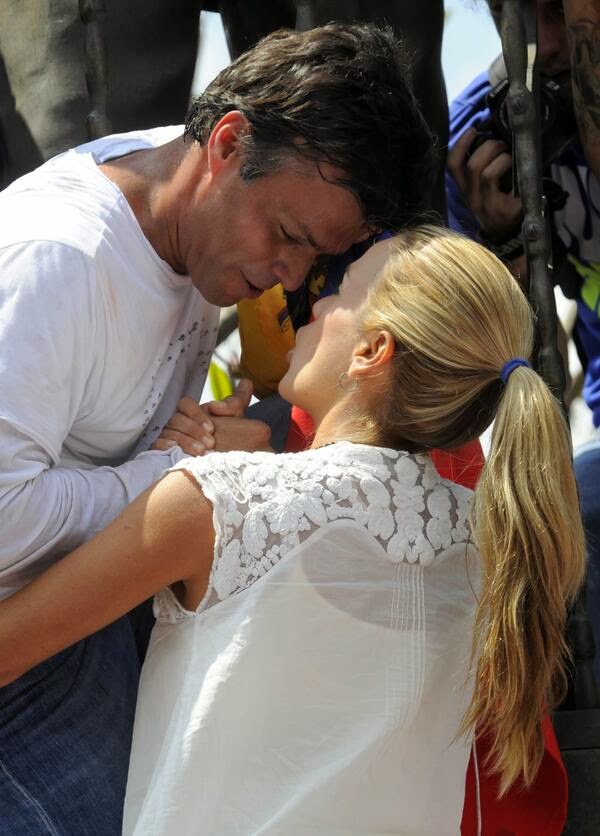 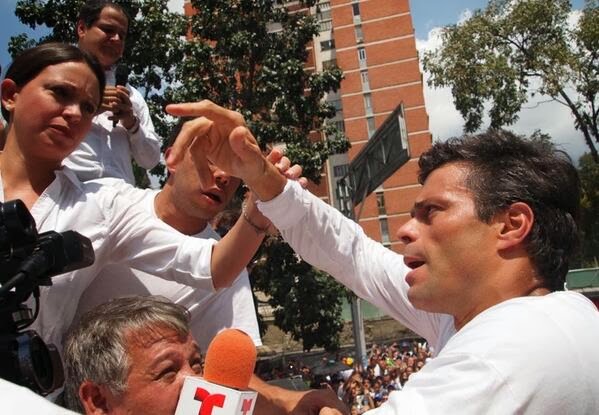 What next?  A few pictures will do. 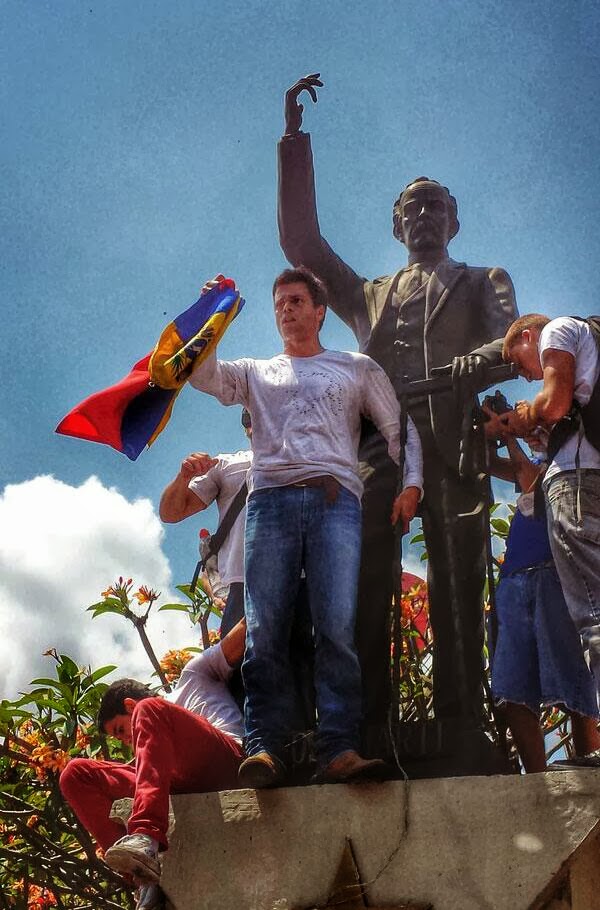 Then let's look at how the crowd overflowed and blocked the main highway of Caracas, blocking all of the city. 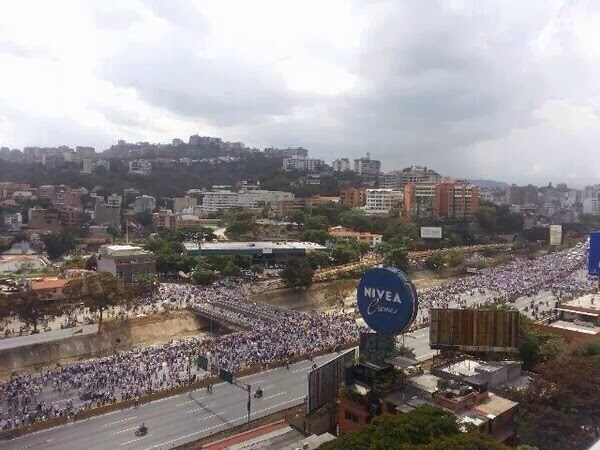 then let's look at how Maracaibo was in spite of the sun and heat.  And I can add pictures of other places. 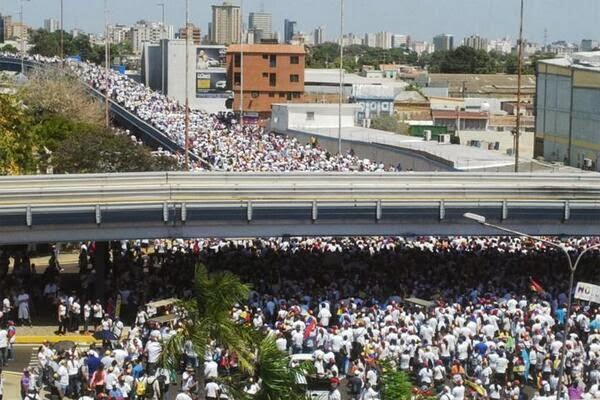 This is FAR, FAR from being over.  I will write more tonight, I need to gather my thoughts some before I update what I wrote on "scripts" in recent days.

History was made today. That much I am sure.