It is kind of impressive that as I was writing on the start of rationing in Venezuela Maduro had a surprise quick trip to Cuba, our colonial master. So many messages...  Let's start with the picture. 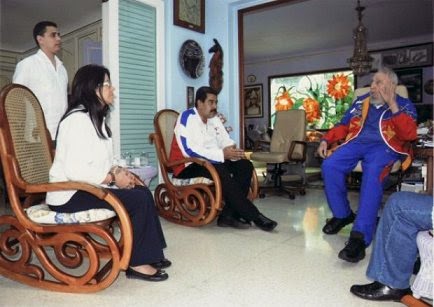 What is wrong here?

Could it be the first lady a.k.a. the "first fighter" sitting attentively demure in front whereas we would have expected either Fidel or Nicolas?

Could it be that all attendants are wearing the de rigueur white shirt of Cuban higher ranking officials?

Could it be that the house of a "revolutionary" seems rather well appointed, in the style of cozy Latin Bourgeoisie? And with modern finishes to boot.


We could start with El Universal which since its recent acquisition by a mysterious owner turns out increasingly laudatory pieces over Maduro. We read that Fidel is pleased with the help sent by Venezuela to Palestine. We learn that Maduro defends Venezuelan oil interests in Cuba. How is that possible or effective is not explained. Maduro tells us that the meeting lasted 6 hours and that he found Fidel energetic and clear minded. Then again Maduro killed Chavez talking to him for about the same amount of time a very few days before he "officially" croaked.

But it gets better, after the 6 hours Fidel and Maburro Maduro went out for a field trip to see the "sembradíos, donde él personalmente atiende todos los días los proyectos agroalimentarios" planted fields, where he personally supervises everyday the agroalimentary projects.   Probably Maburro Maduro tries very hard to forget the myriad of historical projects Fidel concocted, all consistently ruinous failures. Or worse, he confuses Fidel attending his garden as any retiree does as a national project. Let me remind the reader about "ubre blanca" or the "10 million tons" sugar cane (1). And we finish with a flourish as Maburro Maduro reveals that Fidel is doing deep investigation of high protein content vegetables for a green revolution of his own. I am not holding my breath, Fidel Lysenko.

Surprisingly the note from VTV, the 24/24 regime propaganda channel, is actually less syrupy, more to the point, than El Universal note...  with more pictures. Go figure!

I do not need to dig further, I know what I need to know.

The surprise trip of Maduro had a clear intention: to cleanse himself from any direct association with the FMI or any FMI like measures. What is in store for Venezuela is increased scarcity as a way to control the populace, Cuba style. He got Fidel's blessing for anything he will do in the next weeks, be it gas price hike or ration cards (2).  For those who naively thought that a cornered regime was about to take at least a couple of sensible reforms, there you have it. Crash landing. Whatever Maduro will do is designed to perpetuate the colonial status of Venezuela at the service of the Castro bros. Not Cuba, the Castro bros, do not get confused. You know, like Congo belonged to king Leopold and not to Belgium. With all the violence and regression that this entailed in both countries.

The only problem that Fidel has is that Maduro does not have the crazed creativity of Chavez. Maduro needs to go to Cuba so that Fidel can tell him what nincompoopy projects can distract the hoi polloi from its misery. Kind of perversely sad, you know

2) As I pointed out the finger print scanning system is unworkable, and the more so in Venezuela's current conditions when half of the time you need to pass again and again your debit card at the cashier because the system is unstable, went down for a minute, does not connect, what not. What the scanning of finger prints announcement really meant is that the regime hopes to scare people from a finger printing system so that they will be more willing to accept a more understandable less intellectually demanding ration card. At least the chavista base which is the one that will use it for the staples they rely upon.  This is a true and tested method in Cuba where awful things are announced so that people are happy that it did not turn out as bad as expected and thus more willing to accept.
Posted by Daniel at 4:45 AM