And it all came to that

Almost as a rule the end of revolutions and their ersatz is equally appalling. True revolutions like the French one (9 Thermidor) or the Russian one (Kulak starvation) have a moment that mark the end of ideal and the bloody start of a very long path to stability. Ersatz are lucky if they have a semi grand moment but as a rule end up in ridicule if they are lucky (Peron). But some end up in infamy, betraying any possible justification they had at their start. This is the case of this fakest of all revolutions, the bolivarian of Chavez which is slowly petering its way to infamy.


I suppose some would make a case for April 2002 as "the grand moment". But it was not, a mere failed coup and a failed Restoration which yielded a shit faced Chavez that decided to surrender to the Castros in Cuba to get what he really wanted: life presidency. It worked, he died in office.

That first farcical but how damaging moment of April 2002 got a pricey oil enhanced stint which led to the 2007 referendum failure. For me it was the end, no revolution can survive when its idealistic and creative base deserts it, or rather turns against it as Venezuelan campus were never fervent Chavez supporters, even in his first couple of years.

From 2007 on it was all predictable: the pseudo revolution morphed into an autocratic regime that added insult to injury by becoming a narco state and henceforth the most corrupt and violent country in the Americas. By far.

I thought that we had seen it all, that we had accepted the fact that under Maduro we entered the outright dictatorship phase of the regime. A cross between Peron, sans Evita, with the Burma never ending military thuggery. Heck, with Leopoldo Lopez and Maria Corina Machado we are even getting a bi-cephalic version of Aung San Suu Kyi. 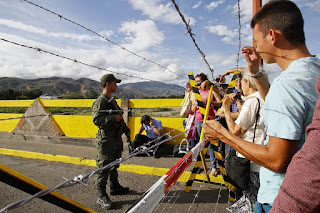 But no, we had to go into such infamy as creating a refugee crisis worse than the one in Europe right now, worse because even if much smaller it is absolutely unjustified, absolutely unnecessary, invented in full by dark conspiracies and likely drug war cartels fighting for turf control. These dark forces have had no qualm to use a state conflict to solve their own internal problems, harking back to imperial models of having the natives fight it ought for the honor of being directly under the toe of the colonial master. Chavismo there cannot even match the epic of Tlaxcala or the complexity of Plassey.

That is not all. There are no people drowning in the Mediterranean but poor Colombians wading in a shallow river with the lone bag they were allowed to carry. No real fences like in Hungary but a mere cattle guard here and there. 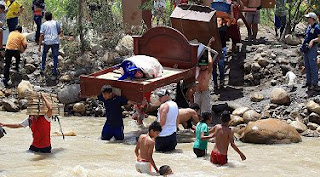 Even in infamy chavismo is so tacky, so venial, so corrupt that it cannot create a moment of epic or even true outrage. The word is taking its time in condemning the regime abuses on the Colombians it unjustly expels because they are mesmerized by the fact the regime is seriously wanting them to believe that these scared house wives wading dirty water are the cause of all of Venezuela trouble. 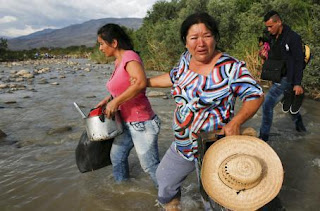 But one thing is not missing, fascism. In addition of all sort of promoted tweet support the regime has even produced Colombians supporting the abuse. A tropical Nazi paradise cannot be that far away. 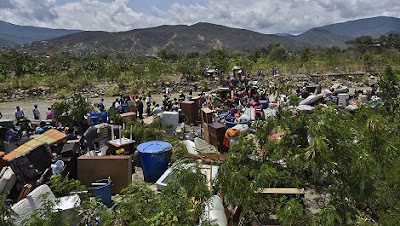 And so it all came up to that. A revolution that claimed to unite a whole continent for the liberation of all of its people against real or imaginary empires ends up in a whimper, ostracizing, jewing up a population that cannot be distinguished at all from the one across the border or from the one they have been living among since there is historical memory. 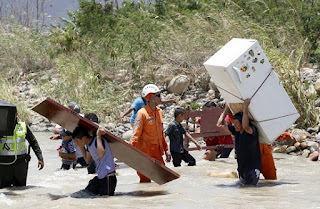 Chavismo is now, like its founder, a corpse. We just need to find an undertaker.

In this one the goebbelian frau Rodriguez says that all is an invention, that nothing is going on at the border, that the scenes are invented. Both videos promptly posted by the people of Maria Corina Machado apparently FROM international footage of news. Footage that is of course not shown on Venezuelan TV.